BNUB
Special Envoy for the Great Lakes Region, Mary Robinson, with other participants at the regional confernce in Bujumbura.

10 July 2013
Aiming to help develop a road map for women's engagement in efforts to bring peace to Africa's long-trouble Great Lakes countries, the United Nations envoy for the region has gathered nearly 100 women, including ministers, for a three-day meeting in Burundi to underscore the fact that “women's leadership matters.”

“We are showing that women's leadership matters and must be at the heart of the Framework of Hope,” Mary Robinson, UN Special Envoy for the Great Lakes said in her remarks to the Regional Conference on Women Peace, Security and Development in the region, which opened yesterday in the Burundian capital of Bujumbura, and which closes tomorrow.

Approximately 100 women, including four ministers from Burundi, the Democratic Republic of the Congo (DRC), Rwanda and Uganda are taking part in a regional conference aimed to support the implementation of the “Framework of Hope” and Security Council resolution 1325 (2000) on women, peace and security, an event organized by Mrs. Robinson, the International Conference for the Great Lakes Region (ICGLR) and the NGO Femmes Africa Solidarité (FAS).

Mrs. Robinson noted some objectives of the regional conference, including the establishment of a Donor's Group, which will commit to giving particular support through accessible funding to Women's Great Lakes Platform Projects. The “Framework of Hope” which is formally known as the Peace, Security and Cooperation Framework for the DRC and the Region was signed in February 2013 by 11 African countries.

At Tuesday's opening ceremony, Mrs. Robinson said she considered it a “moment of great hope and expectation” in her vision for her mandate as Special Envoy. “From the beginning, I have wanted to do it differently, to work both top down with Heads of State of the 11 countries, and the four institutions that are guarantors of the Framework…and bottom-up with the peoples of the Region who must be the real beneficiaries”, she stressed, alluding to women's role.

The event was chaired by the President of Burundi, Pierre Nkurunziza, who stressed that women's participation in peace initiatives is a reality in the region. He reminded ICGLR State members of mechanisms put in place to ensure that women's contribution regarding the respect and implementation of agreements signed by parties is taken into consideration.

For her part, Valerie Trierweiler, of France, expressed solidarity towards Great Lakes region women that are victim of violence. “In May, I was invited by the UN for a meeting in Geneva on Human Rights focusing 'rape as a war weapon'. And today I am here with you with a simple message: violence against women must stop”. 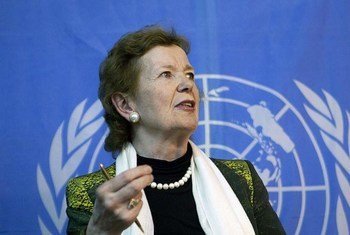 8 June 2013
Welcoming the possible resumption of peace talks between the Government of the Democratic Republic of the Congo (DRC) and the 23 March Movement (M23), the United Nations Special Envoy for Africa's Great Lake's region has urged both sides to engage in earnest discussion to resolve all outstanding issues.