IRIN/Nancy Palus
Woman voting in the Hamdallaye area of Conakry, the capital of Guinea in June 2010.

10 July 2013
The United Nations Peacebuilding Commission (PBC) panel dealing with the situation in Guinea welcomed today the agreement between the country's Government and opposition parties to hold legislative elections at the end of September.

The United Nations Peacebuilding Commission (PBC) panel dealing with the situation in Guinea welcomed today the agreement between the country's Government and opposition parties to hold legislative elections at the end of September.

In a statement, the Commission's Guinea Configuration commended the countries political leaders for “having chosen the path of dialogue and compromise in the interest of the country,” which in March saw a wave in opposition protests that led to several death and hundreds of injuries.

The agreement was signed on 3 July in the Guinean capital, Conakry, at the end of the UN-mediated inter-Guinean political dialogue that was launched on 28 March.

Last week, UN Secretary-General Ban Ki-moon hailed this development as a “breakthrough,” and called on the Independent National Electoral Commission (CENI), with the support of international bilateral and multilateral partners, including the Economic Community of West African States (ECOWAS), the European Union, the Organisation internationale de la Francophonie (OIF) and the United Nations, to do its utmost to implement the electoral timeline.

The Configuration stressed the elections must be inclusive, free and transparent, and called on all stakeholders to respect the new electoral schedule and the provisions of the signed agreement, including measures for accompaniment and appeasement, so elections can be held under peaceful and secure conditions.

“The Configuration stands ready to continue its support to international efforts for accompanying the elections […] and confirms its willingness to provide all the support possible to the implementation of the agreement in terms of technical, political and financial assistance, in order to ensure its effective execution,” the statement said.

Guinea is one of six countries – along with Burundi, the Central African Republic (CAR), Guinea-Bissau, Liberia and Sierra Leone – currently on the agenda of the Commission, which was set up in 2005 to help countries emerging from conflict make an irreversible transition from war to sustainable peace. 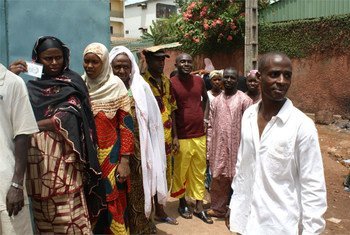 4 July 2013
United Nations Secretary-General Ban Ki-moon today welcomed the signing of an agreement between Guinea's presidential coalition and opposition parties to hold legislative elections, commending all political leaders for “choosing the path of dialogue to address their differences.”