UNHCR/S. Modola
An archive photograph of Somali women waiting for UNHCR aid supplies at a settlement for the displaced in Mogadishu.

9 July 2013
The United Nations refugee chief today expressed solidarity with the Somali people during a visit to Mogadishu, particularly the hundreds of thousands who have fled the country and are seeking to return to their homeland after two decades of conflict.

“This is a moment of hope for the people of Somalia,” said High Commissioner for Refugees António Guterres, adding that his agency (UNHCR) will be working with Somalia and the host countries to be prepared when the time arrives to repatriate those who fled the country and who have “suffered on a scale that is beyond measurement.”

Somalia has been torn asunder by factional fighting since 1991 but has recently made progress towards stability. The conflict has left some 1.1 million internally displaced persons (IDPs) and over 1 million more living in exile in neighbouring countries, mostly in Kenya, Ethiopia and Yemen.

With parts of Somalia showing signs of increasing stability, countries hosting Somali refugees are considering the potential to encourage them to return, while some Somalis have spontaneously decided to move back to areas under Government control.

“UNHCR likes nothing more than to help people go back home, based on their own free will and when conditions are met for a safe and dignified return,” Mr. Guterres said, while warning that the security situation is still fragile, particularly in central-south Somalia, where most of the refugees come from.

Humanitarian access to most parts of this region is still limited, UNHCR said in a news release, which hampers engagement with communities and delivery of assistance.

“Return to Somalia should be, first and foremost, voluntary,” Mr. Guterres said. “At this time, the vast majority of Somalis in exile are still in need of asylum as conditions are not yet safe for a rushed, large-scale repatriation.”

Just last month, the UN’s compound in Mogadishu was attacked, resulting in at least eight deaths. In addition, thousands are still fleeing unsafe conditions in Somalia, with some 21,000 refugee arrivals registered during the first half of this year.

“The Somali situation will remain one of UNHCR’s top priorities,” Mr. Guterres said. “I hope peace will create the conditions inside Somalia to do what every refugee wants – to go back home.” 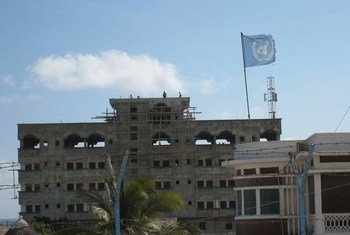 19 June 2013
Top United Nations officials have voiced their outrage at today’s deadly attack on the world body’s compound in the Somali capital, Mogadishu, while reiterating that it will not deter the Organization from helping the country as it proceeds on the path to stability and development.