Life is slowly returning to normal in parts of Mali, but with the thousands of people displaced and a pre-harvest lean season underway, the main priority right now for the United Nations food relief agency is to keep people from starving.

For the past few weeks, he has travelled between Bamako, Mopti and Segou, in the south to the areas in the north most affected by the crisis last year, including Timbuktu.

Northern Mali was occupied by radical Islamists after fighting broke out in January 2012 between Government forces and Tuareg rebels. The conflict displaced hundreds of thousands of people and prompted the Malian Government to request assistance from France to halt the southward march of the extremist groups.

With the Islamist occupation reversed by subsequent actions, the UN recently set up its newest integrated peacekeeping mission in the country – MINUSMA– to consolidate stability and create the conditions for provision of humanitarian aid.

More than 4.3 million people are now in need of such aid, with nearly1.4 million requiring immediate food assistance in the north, according to WFP figures. Some 110 children die every day, a third from malnutrition.

The UN has access to areas in the north, but the situation remains “tight,” Mr. Brecher said. “Humanitarian access in the north remains unpredictable,” he commented.

“Many markets are functioning, at least partially, but cash is a problem.” Few banks in the country are open,” he added.

“There is electricity in the main cities, often only between 6 p.m. and 11 p.m.,” Mr. Brecher said. “Even though some gas stations are not functional yet, fuel can be found. Often of poor quality, though.”

View of a sunset over the Niger River from Mopti, a town in southern Mali. Photo: WFP/Alexandre Brecher-Dolivet

“More and more stores are open, and Government offices in light of the upcoming presidential election,” he added, speaking of the scheduled 28 July vote.

Even before the conflict, the food security situation in Mali was precarious. The West African country is at the heart of the Sahel region whose sliver stretches across the continent from the Atlantic Ocean in the west to the Red Sea in the east. Access to food in the Sahel is hampered by high poverty, extreme weather, environmental degradation, low investment in agriculture, high prices and vulnerability to market volatility.

The humanitarian community has appealed for $1.7 billion to help millions in need this year in the region, which is still reeling from the crisis that affected some 18 million people in 2012. This year’s appeal is less than 40 per cent funded.

Travelling in the country, Mr. Brecher sees people farming – the rainy season has now started, the time when people plant crops, such as the grain grass sorghum.

Cattle breeding is also practiced in Mali, so it is common to see sheep, goats, cows and donkeys standing around staring back at you, he added.

Last month, WFP and its partner, the Agency for Technical Cooperation and Development (ACTED) in southern Mali started providing food assistance to displaced people and host families. Beneficiaries will for the first time receive cash transfers instead of food. Increasingly popular, the cash transfers empower families to decide themselves what food to buy, and to purchase it locally, spurring local markets.

Similar programs are due to be launched next month in Mopti, and in Timbuktu and Gao, if security allows.

In other parts of the north, WFP is extending its emergency school feeding program to some 300 schools. There is also a work-for-food programme in projects near Timbuktu to rehabilitate irrigation plots, along with supplementary feeding activities for new mothers and their infants. 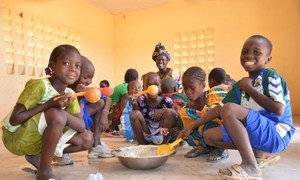 The continuing conflict in Mali combined with the country’s impending “lean season” is threatening to aggravate hunger in the Sahelian nation, the United Nations food aid agency warned today, adding that it was “urgently working” with partner organizations to help affected families, particularly in the country’s North.