Secretary-General Ban Ki-moon today welcomed a move by the European Parliament to support the proposal to backload permits from the European Union's carbon market.

“The vote sends a clear signal that the European Union remains committed to carbon pricing,” the Secretary-General's spokesperson said in a statement.

On 3 July, EU politicians in Strasbourg voted 344-311 in favour of temporarily removing a maximum of 900 million permits, out a total surplus of around 1.7 billion, from trade. The move is meant to drive up carbon prices which have been at a record low.

According to today's statement, Mr. Ban's spokesperson said the UN chief hopes more structural reforms will now follow in order to strengthen the EU's carbon market “as a driver for innovation and energy efficient solutions.”

The Secretary-General added that the EU's carbon market is an inspiration to the development of similar markets in China, Australia, South Korea and the United States.

Ensuring environmental sustainability is one of the eight anti-poverty targets known as the Millennium Development Goals (MDGs) with a deadline of 2015.

In addition, the UN is now working with partners on a post-2015 sustainable development that will build on the progress made by the MDGs. 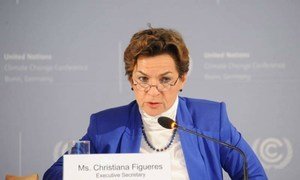 The United Nations climate change body said it has made concrete progress towards a new universal agreement on climate change during its latest round of talks which wrapped up today in Germany.