4 July 2013
As Yemen presses ahead with its transition, a United Nations humanitarian envoy in the region expressed serious concern today about the plight of millions of people needing urgent emergency and early recovery assistance, without which, the country's political achievements will never gain traction.

As Yemen presses ahead with its transition, a United Nations humanitarian envoy in the region expressed serious concern today about the plight of millions needing urgent emergency and early recovery assistance, without which, the country's political achievements will never gain traction.

“There can be no sustainable transition unless their basic humanitarian needs are met, said the Secretary-General's Humanitarian Envoy for Kuwait, Abdullah Al-Matouq in a press statement summing up on his three-day visit to Yemen.

Mr. Al-Matouq visited Yemen from 1-4 July to sound the alarm about the severity and scale of humanitarian crisis in the country. He also aimed to assess the impact of recent political developments on the humanitarian situation and encourage greater integration of international and regional organizations and Governments in the humanitarian response.

Yemen has been undergoing a democratic transition led by President Abdrabuh Mansour Hadi, who came to power in a February 2012 election. A major milestone was achieved in March of this year with the opening of the national dialogue conference that will feed into a constitution-making process and pave the way for general elections in 2014.

“The humanitarian situation remains serious...This crisis could affect the recent political achievements unless it is comprehensively addressed,” the envoy said, noting that during his visit, he had met with relief organizations, donors and senior Government officials, including President Hadi.

Mr. Al-Matouq also visited Haradh in the northern Hajjah Governorate to see first han the plight and needs of thousands of internally displaced Yemenis and migrants from the Horn of Africa.

Almost 300,000 Yemenis remain internally displaced in the north, while migrants from the Horn of Africa continue to arrive in search of economic opportunities in the Gulf region, and suffer a wide range of abuses.

He said that some 25,000 migrants are stranded in Haradh after failing to cross into Saudi Arabia. The internally displaced, stranded migrants as well as their host communities are in urgent need of improved access to health care, food, nutrition, shelter, clean water, proper sanitation facilities and protection.

While in the south, improved stability has led to the return of over 160,000 internally displaced people (IDPs), he said that they need support to rebuild their lives, and there is now a window of opportunity to provide assistance for livelihoods, capacity-building and sustainable solutions which can help build people's resilience to future crisis.

“Humanitarian agencies are working with the Government of Yemen to address these and a wide range of other needs nationwide, but many are facing funding gaps which has affected their operations,” he said, explaining that halfway through the year, the 2013 Humanitarian Response Plan is only 38 per cent funded, “with critical gaps in life-saving services such as health, water, sanitation and protection, as well as significant funding shortages for livelihoods and early recovery programmes.”

While acknowledge the contribution of the Friends of Yemen, including its neighbours in the Gulf region to support alleviation of human suffering, he underscored that adequate funding for the humanitarian response across all sectors in Yemen is crucial.

“I am very concerned that more than half the Yemen's population of 24 million people do not have access to clean water and sanitation, 10 million do not have sufficient access to food, and more than 6 million lack access to basic health care, including life-saving reproductive health services,” Mr. Al-Matouq said.

“As the region sees continued conflict and instability, it is vital that we all work together – the Yemeni Government, United Nations agencies, international, regional and local NGOs as well as donors – to end the suffering of the people in Yemen,” he concluded. 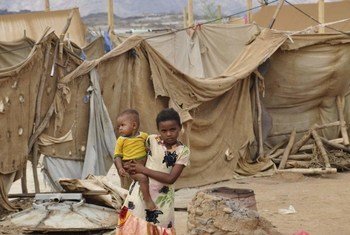 16 May 2013
Yemen is facing a worsening humanitarian situation which could destabilize the country’s gains on the political front, a senior United Nations relief official warned today, noting that half of the country’s 24 million people are in need of assistance.