Nancy Palus/IRIN
People in the capital Conakry line up to vote in Guinea's June 2010 presidential election.

4 July 2013
United Nations Secretary-General Ban Ki-moon today welcomed the signing of an agreement between Guinea's presidential coalition and opposition parties to hold legislative elections, commending all political leaders for “choosing the path of dialogue to address their differences.”

United Nations Secretary-General Ban Ki-moon today welcomed the signing of an agreement between Guinea's presidential coalition and opposition parties to hold legislative elections, commending all political leaders for “choosing the path of dialogue to address their differences.”

Hailing this political development as a “breakthrough,” Mr. Ban, in a statement issued by a spokesperson in New York, welcomed the signing on 3 July of the deal in the Guinean capital, Conakry, at the end of the UN-mediated inter-Guinean political dialogue that was launched on 28 March.

According to news reports, the agreement set legislative elections for the end of September, aiming to conclude Guinea's political transition peacefully.

In March, protests in the West African nation related to the long-delayed polls led to several deaths and hundreds of injuries. At that time, both Secretary-General Ban Ki-moon and the UN human rights office appealed for calm amid the violence and urged political actors in Guinea to pursue dialogue to create conditions for peaceful elections.

“The Secretary-General is encouraged by this breakthrough which charts the way for free, fair, transparent and peaceful legislative elections,” today's statement says, adding that the UN chief commends the sense of compromise of the Guinean political leadership in overcoming the political impasse.

“He urges them to adhere strictly to the new electoral timeline, so as to establish democratic institutions and allow the country to achieve national cohesion and social and economic development.”

The Secretary-General in the statement calls on the Independent National Electoral Commission (CENI), with the support of international bilateral and multilateral partners, including the Economic Community of West African States (ECOWAS), the European Union, the Organisation internationale de la Francophonie (OIF) and the United Nations, to do its utmost to implement the electoral timeline.

“The United Nations is fully committed to extend the required assistance for holding these important elections,” he says.

Mr. Ban goes on to commend Guinean President Alpha Condé for initiating a political dialogue to resolve all outstanding issues pertaining to the electoral process. Through the statement, he also commends all other political leaders for choosing the path of dialogue to address their differences.

“The Secretary-General also thanks the College of Facilitators, including his Special Representative for West Africa, Mr. Said Djinnit, for their contribution towards this milestone agreement for the consolidation of democracy and stability in Guinea,” the statement concludes. 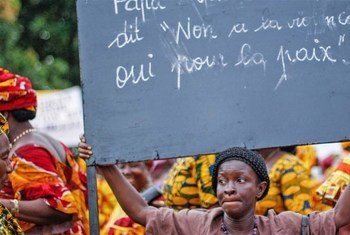 11 June 2013
The spokesperson for Secretary-General Ban Ki-moon said today that the UN chief is “encouraged” by the progress made in the multi-party political dialogue underway in the Guinean capital, Conakry.