Shareef Sarhan/UNRWA
Living conditions continue to deteriorate in Gaza and West Bank under the blockade.
3 July 2013

A senior United Nations humanitarian official today urged the Israeli Government to lift restrictions on the free movement of people and goods in the Gaza Strip, as he met with Palestinian farmers and fishermen whose livelihoods have been ruined by the measures.

A senior United Nations humanitarian official today urged the Israeli Government to lift restrictions on the free movement of people and goods in the Gaza Strip, as he met with Palestinian farmers and fishermen whose livelihoods have been ruined by the measures.

James W. Rawley, the UN Humanitarian Coordinator for the occupied Palestinian territory, learned first-hand the impact of the restrictions on Palestinian livelihoods as he led a visit of humanitarian agencies to Gaza.

“The cumulative impact of Israel's restrictions, some of which have been in place for more than a decade, has devastated the livelihoods of families in Gaza, such as the farmers and fishermen we met today,” said Mr. Rawley, who is also UN Deputy Special Coordinator for the Middle East Peace Process.

“These restrictions affect the poorest the most; they impede development of a sustainable economy and increase dependency on aid,” he added in a news release.

The visit to Gaza comes as the Office for the Coordination of Humanitarian Affairs (OCHA) released a new update in which it pointed out that the longstanding restrictions on the movement of people and goods to, from and within Gaza have continued to undermine the living conditions of 1.7 million people.

“Many of the current restrictions, which were originally imposed in the early 1990's, were intensified in June 2007, following the Hamas takeover of Gaza and the imposition of a blockade by Israel,” it stated.

The update added that some of them have been subsequently eased since 2010. These restrictions have reduced access to livelihoods, essential services and housing, disrupted family life, and undermined the people's hopes for a secure and prosperous future.

Recent assessments have shown that 57 per cent of people in Gaza do not have money to buy sufficient food and 80 per cent of families receive some form of international aid.

“The economy is effectively kept alive through public expenditure, international aid and the illegal tunnel trade, in which thousands of workers, some of them children, continue to risk their lives every day,” stated the news release.

It went on to note that long-term restrictions on access to as much as 35 per cent of Gaza's agricultural land and currently more than two-thirds of its fishing areas have resulted in estimated annual economic losses of over $76 million.

Also, the continued ban on the transfer of produce and other goods from Gaza to its traditional markets in the West Bank and Israel has effectively prevented sustainable economic growth; less than one truckload of goods per day (on average) exited Gaza in the first half of 2013, compared to 38 during the first half of 2007 before the imposition of the closure.

“While there has been some improvement in access to land and sea areas following the 21 November 2012 ceasefire agreement, only a full lifting of restrictions on access, as well as on exports and transfers of produce, will enable recovery of the fishing and agricultural sectors and the livelihoods of those who depend upon them,” said Mr. Rawley.

He also voiced concern that measures undertaken to enforce access restrictions on land and at sea continue to place Palestinian farmers, fishermen and other civilians at serious physical risk.

The Humanitarian Coordinator said that while Israel has legitimate security concerns, any response to them, including

limitations on the free movement of people and goods, must comply with international law. “They must be proportionate to a specific threat and must not be punitive in nature.

“Palestinians in the Gaza Strip have the capacity to develop their communities and to build a sustainable local economy,” he stated. “Only the full lifting of these long-term restrictions will enable them to do so.” 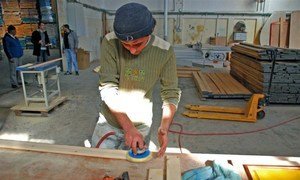 As the Israeli blockade of the Gaza Strip enters its sixth year, several UN agencies today joined a group of international charities in unanimously calling for the lifting of the blockade.