UNICEF/Pierre Holtz
In the village of Mélé, Central African Republic, only half of the children in the region go to school because of conflict.

“Even before the military takeover of the country, the Central African Republic was already one of the toughest places for a child to survive, consistently ranking among the bottom 10 countries in development indicators,” UNICEF spokesperson Marixie Mercado told reporters in Geneva.

“The assessments showed that needs have deepened and extended, and that children were literally bearing the brunt of a vicious cycle of poverty, poor governance, conflict and political instability.”

The assessments were done in 13 of the country's 16 prefectures, and more assessments are planned in the east.

Most of those interviewed said they had changed food sources and over half reported higher food prices and less availability in markets.

Although comprehensive numbers were unavailable, the assessments also revealed major protections risks, with an increase in cases of gender-based violence, unaccompanied children, and recruitment of children by armed forces.

The dire humanitarian situation in the CAR has been exacerbated by fighting in the past six months which further deteriorated even the most basic services. Violence erupted in December 2012 when the Séléka rebel coalition launched a series of attacks. A peace agreement was reached in January, but the rebels again seized the capital, Bangui, in March, forcing President François Bozizé to flee.

An estimated 206,000 people are internally displaced in the country, while more than 50,000 have fled mainly to the Democratic Republic of the Congo, Cameroon and Chad. CAR is also housing some 17,000 refugees from the neighbouring countries.

Ms. Mercado said UNICEF had brought in over 140 metric tonnes of emergency supplies since the outset of the crisis, and was working with partners to provide health, nutrition, protection, water and sanitation support wherever access permitted.

The agency's emergency appeal for $11.5 million, issued before the military takeover of the country, had more than doubled to $32.4 million. Of this, so far under $9 million had been received. 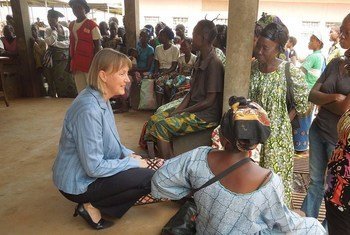 4 June 2013
An allocation of over $7.1 million from the United Nations Central Emergency Response Fund (CERF) will provide more than a million people in the Central African Republic – half of them children – with lifesaving assistance, the UN humanitarian relief arm announced today.