Nearly 10 million people living with HIV were accessing antiretroviral treatment last year, says a new United Nations report, which notes that even more people can be reached with smart planning.

Last year's figure represents the biggest increase from one year to another as numbers of people accessing antiretroviral treatment rose by 1.6 million from 2011 to 2012, according to the report, released today by the Joint UN Programme on HIV/AIDS (UNAIDS), the World Health Organization (WHO) and the UN Children's Fund (UNICEF).

New guidelines from WHO, issued together with the report, give clear recommendations that people living with HIV should start antiretroviral therapy (ART) much earlier, and immediately in some instances.

“These guidelines represent another leap ahead in a trend of ever-higher goals and ever-greater achievements,” said WHO Director-General Margaret Chan.

“With nearly 10 million people now on antiretroviral therapy, we see that such prospects – unthinkable just a few years ago – can now fuel the momentum needed to push the HIV epidemic into irreversible decline,” Dr. Chan stated in a news release.

The guidelines recommend, among other measures, providing ART to all children with HIV under the age of 5, all pregnant and breastfeeding women with HIV, and to all HIV-positive partners where one partner in the relationship is uninfected.

“Advances like these allow children and pregnant women to access treatment earlier and more safely, and move us closer to our goal of an AIDS-free generation,” said UNICEF Executive Director Anthony Lake. “Now, we must accelerate our efforts, investing in innovations that allow us to test new born babies faster and giving them the appropriate treatment so that they enjoy the best possible start in life.”

Under the new guidance, some 26 million people will now be eligible for antiretroviral therapy, an additional 9.2 million from the previous 2010 guidance.

“It is our moral and scientific obligation to reach as many people as we can with antiretroviral therapy,” UNAIDS Executive Director Michel Sidibé said in a separate news release. “This is what we will continue to strive for and we believe that we can significantly scale up access to treatment even within the current financial envelope.”

By making smart choices, UNAIDS estimates that treatment can be further expanded within the existing resource needs of between $22-24 billion for 2015.

The agency estimates that cost savings could be achieved through three main areas: a reduction in costs of medicines and medical supplies, particularly as volumes increase; simplifying delivery systems; and increasing efficiencies within the overall AIDS response.

Through a more competitive bidding process, South Africa has reduced the cost of procurement of antiretrovirals to the lowest price anywhere in the world at $127 per person per year for the fixed dose combination recommended in the new guidelines. This has resulted in a 53 per cent reduction in expenditure on antiretroviral treatment for South Africa.

Additional savings are expected as methods of testing for HIV become simpler and easier to administer (a fingerpick HIV test, for example, can now give results in 30 minutes). Other efficiencies are being made as more and more HIV services are being integrated into existing structures such as antenatal clinics and tuberculosis facilities.

The challenge set by the new guidelines will encourage countries, donors and partners in the AIDS response to strive for even greater results. If the recommendations in the new guidelines are implemented they would avert an estimated 13.5 million deaths and 19 million new HIV infections by 2025. 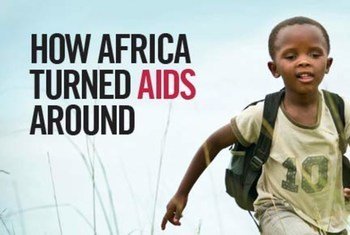 21 May 2013
The number of people in Africa receiving antiretroviral treatment increased from less than 1 million to 7.1 million over seven years, according to a United Nations report which documents the progress in the AIDS response in the world’s second largest continent.