In his speech, Mr. Ban also offered his “heartfelt appreciation” the people and leadership of the Kingdom of Saudi Arabia and the Saudi Committees and Campaigns.

“Their financial support is making a concrete difference in the lives of hundreds of Palestinian families, improving conditions in communities and contributing to peace, security and stability,” Secretary-General Ban said in a ceremony at UN Headquarters in New York.

Mr. Ban presented the Outstanding Donor Award for the Special Human Settlements Programme for the Palestinian People to Abdallah Al-Mouallimi, the Permanent Representative of the Kingdom of Saudi Arabia to the UN, who accepted it on behalf of the late Crown Prince.

“The late Crown Prince will be remembered for his commitment to humanitarian and relief work all over the world,” said Mr. Ban.

“He was particularly committed to the work of UN-Habitat, especially in support of housing and income generating projects for families in Palestine,” the UN chief added at a ceremony that included Joan Clos, Executive Director of UN Human Settlements Programme (UN-Habitat). Riyad Mansour, Permanent Observer of the State of Palestine to the United Nations, was also present.

Palestinian People in Gaza, which given to UN-Habitat since 2007 the financial support of about

$17 million, representing the largest donation to the UN-Habitat Special Human Settlements Programme for the Palestinian People, according to the agency.

Mr. Ban also noted that in Hebron Governorate of the West Bank, the Saudi organizations have supported programmes at Technical and Vocational Training Centre and the King Abdullah Bin Abdul Aziz City for Charity Housing and Income Generating Projects for Underprivileged Women.

In addition, the Prince Nayef Bin Abdulaziz Project for Reconstruction in Gaza supports the reconstruction of 100 new housing units with eco-friendly “green measures” for non-refugee families in the Gaza Strip whose houses where destroyed during the Gaza conflict, Mr. Ban said.

For his part, Dr. Clos, also expressed his sincere thanks and reiterated that the late Crown Prince will always be remembered for devoting his life to promoting humanitarian and relief work all over, including his tremendous dedication to the work of UN-Habitat.

♦ Receive daily updates directly in your inbox - Subscribe here to a topic.
♦ Download the UN News app for your iOS or Android devices.
palestin|Saudi Arabia 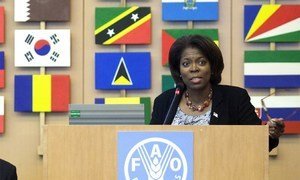 The head of the United Nations World Food Programme (WFP) today paid tribute to the generosity of Saudi Arabia in helping the agency fight hunger and meet the food needs of millions of people.