IRIN/Maria Font de Matas
Migrants, such as these workers in Jordan, send remittances to their home countries.
28 June 2013

Remittances – the money sent by migrants to their home countries – could generate $30 billion annually for investment in rural areas if initiatives were scaled up, according to the United Nations agency that works to improve the lives of the world's rural poor.

Remittances – the money sent by migrants to their home countries – could generate $30 billion annually for investment in rural areas if initiatives were scaled up, according to the United Nations agency that works to improve the lives of the world's rural poor.

Remittances “can empower rural people to blaze a trail out of poverty and exclusion,” said Kanayo F. Nwanze, President of the UN International Fund for Agricultural Development (IFAD) today at an event at its headquarters in Rome.

“The value of remittances is staggering, but the rural poor need greater impact.” Mr. Nwanze said, underscoring: “We need more strategic ways to invest the $200 billion sent home to the rural areas every year.”

More than 215 million people across the globe live outside of the countries they call home. Most remittance families operate outside of the world's financial system, dependent on costly cash transfers that often require significant travel for rural recipients.

Despite the global prevalence of electronic money transfers, most migrant workers are excluded from convenient, modern banking and are forced to initiate more than one billion separate remittance transactions worldwide each year.

Reducing transaction costs is a key priority as well as affirming the significant role that diaspora play in rural development, particularly agriculture, the IFAD chief added.

Organized jointly by IFAD and the World Bank, the event has more than 350 participants including representatives from the Group of Eight (G8) largest world economies, as well as central bankers and microfinance institutions, money transfer operators and postal networks.

Today's event is the first since the Fourth Global Forum on Remittances 2013 in Bangkok, Thailand, last month.

♦ Receive daily updates directly in your inbox - Subscribe here to a topic.
♦ Download the UN News app for your iOS or Android devices.
IFAD|rural 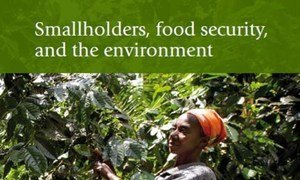