UNHCR/P. Behan
A displaced mother and her two children in Rakhine state. They originally came from the Pauktaw area.

The incident took place yesterday morning in the Kyein Ni Pyin IDP camp in Pauktaw township, a site where the UN High Commissioner for Refugees (UNHCR) has been building temporary shelters for some 4,400 ethnic Rohingya displaced by last year's inter-communal violence.

“The [latest] violence is believed to have been triggered by a dispute between displaced people and a village leader,” UNHCR spokesperson Adrian Edwards told a news conference in Geneva. “A reportedly poor relationship between them had been compounded by false rumours that displaced people would be isolated and prevented from returning to their places of origin.

“When some of the displaced gathered at a nearby military post asking that the leader be handed over, gunfire was used by the authorities to disperse the crowd and resulting in the fatalities and wounding,” he said.

UNHCR staff arrived at the scene shortly after to follow up with the victims' families and facilitate medical attention to the injured. “We are also concerned about the safety of the village leader and his family,” said Mr. Edwards.

The agency is calling for an investigation into the incident, and appealing to the authorities to handle the matter in a peaceful and calm way to avoid fuelling further violence and loss of life. It is also calling for dialogue between the involved parties to resolve the grievance.

“Joint efforts by the Government, community leaders and humanitarian actors are also needed to dispel rumours about the rights of displaced people to return to their places of origin in Kyein Ni Pyin and other villages where these sentiments have been emerging,” said Mr. Edwards.

UNHCR is the lead agency for shelter, camp coordination, camp management and protection in the humanitarian response in Rakhine state. Its current priority is to provide temporary relief for the displaced during the rainy season.

“We strongly believe that the Government must build confidence with the communities and promote reconciliation, so that those displaced can eventually return to their areas of origin,” Mr. Edwards stated.

He added that Thursday's tragic incident also highlights the urgent need to strengthen the camp coordination and camp management work which is grossly underfunded despite current needs. A year after the first wave of inter-communal violence erupted, there are still up to 140,000 people displaced within Rakhine state. 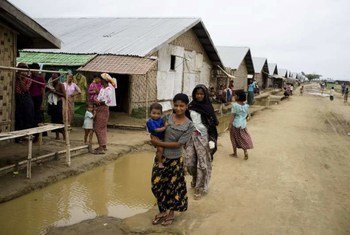 Up to 140,000 people still displaced one year after communal clashes in Myanmar – UN