27 June 2013
The recent wave of violence in Iraq is taking a toll on human rights in the country, according to a United Nations report out today which recommends that the Iraqi Government implement measures in a range of areas, including police training and women's and children's rights.

The recent wave of violence in Iraq is taking a toll on human rights in the country, according to a United Nations report out today which recommends that the Iraqi Government implement measures in a range of areas, including police training and women's and children's rights.

According to the report, which covers the period from 1 July to 31 December 2012, at least 3,200 civilians were killed and more than 10,000 injured in 2012 in a reversal of the trend that had seen violence decline in recent years. The report warns that the upturn in armed violence requires greater civilian protection and strengthening of human rights institutions in the country.

“The return to high casualty figures means that much more needs to be done to protect civilians,” said the Special Representative of the Secretary-General for Iraq, Martin Kobler.

“We have consistently urged Iraqi leaders to engage in dialogue and develop policies that address the root causes of the problem. Too many innocent lives have been lost,” he said.

The report, produced by the Human Rights Office of the UN Assistance Mission for Iraq (UNAMI) in cooperation with the UN Office of the High Commissioner for Human Rights (OHCHR), stresses that more needs to be done to ensure financial, medical and other forms of support reach victims of violence.

It also notes that the Iraqi Government has yet to respond to UN and international calls for a moratorium on the death penalty.

“Weaknesses in the criminal justice system mean that the death sentence is often handed down under questionable circumstances in Iraq,” said the UN High Commissioner for Human Rights, Navi Pillay. “

With 123 prisoners executed in 2012, there is a great risk that the worst miscarriages of justice imaginable are taking place here.”

The report welcomes progress made to implement the National Action Plan on Human Rights, and a number of laws passed by the Council of Representatives. However, it calls for further efforts to empower the Iraqi High Commission for Human Rights and to reduce interference by political blocs.

“Women, minorities, the disabled, and other vulnerable groups in Iraq continue to suffer from discrimination, economic and

social barriers, and targeted attacks,” said Ms. Pillay. “I urge the Government of Iraq to do everything possible to implement the recommendations made in this report. Strengthening human rights institutions should be a top priority.”

Mr. Kobler added that human rights should be a paramount concern for all members of the Iraqi Government, particularly at a time when citizens need protection.

The report also makes recommendations regarding women and children's rights, freedom of opinion and expression, and addressing discrimination against ethnic minorities, among other topics. 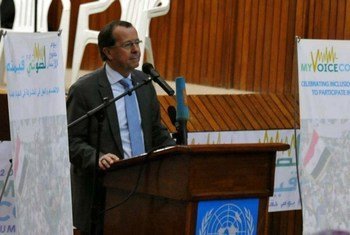 25 June 2013
The United Nations envoy in Iraq today strongly condemned the attacks that killed and injured dozens of protesters, including two prominent Turkmen leaders, in the northern town of Tuz Khurmatu.