26 June 2013
Presenting his eagerly-awaited strategy to put the strife-torn Sahel back on its feet, the United Nations Special Envoy for the region called today on the Security Council to back a framework that would guide the Organization’s collective efforts in capacity building to address resilience, cross-border threats and inclusive governance.

“Only a strategy that goes beyond the existing efforts will allow the Governments of the region to overcome the [immense challenges] and move towards long-term peace and stability,” said Romano Prodi, briefing the Council on the Secretary-General’s latest report on the situation in the region, where years of successive political and humanitarian crises have been exacerbated by the spread of terrorism, organized crime and the recent conflict in Mali.

The Sahel stretches from Mauritania to Eritrea, including Burkina Faso, Chad, Mali, Niger, Nigeria, Senegal and Sudan, a belt dividing the Sahara desert and the savannahs to the south. The report notes that the historic trade routes across Algeria, Burkina Faso, Chad, Libya, Mali, Mauritania and Niger are the most vulnerable to terrorist and criminal networks. It also details a raft of challenges facing the region, including, among others, insufficient border management, recurring coup d’états and social strife.

With such “daunting, multifaceted” issues to consider, Mr. Prodi said that his strategy, which is annexed to the report, is based on a “four by four” approach, aiming to bolster governance, security, humanitarian requirements and development, while enhancing coordination in four spheres between the Governments of the region, between the international community, reaching out and listening to the people of the Sahel, and within the UN system.

“I believe this four by four strategy should be the foundation of a collective response to the challenges in the region,” he continued, adding that he had consulted widely on the plan, including with UN officials, regional actors, civil society and tribal leaders. “I felt there was a need to act with urgency right from the very outset… not only because of the gravity of the situation but also to harness global support for the Sahel which would not last forever.”

In all this, Mr. Prodi noted the impact of the crisis in Mali, where the “timely” intervention of French forces had halted the southward march of terrorists groups that had taken over the country’s northern half and there was now need for a credible and all-inclusive political dialogue to address genuine grievances of all Mali’s communities.

“Success or failure in Mali will affect the entire Sahel and… while focus and attention on Mali is critical, it should not be at the cost of the rest of the region. In other words, please do not forget the Sahel,” he said.

The strategy focuses on five key Sahelian countries in the greatest of need – Mali, Burkina Faso, Mauritania, Niger and Chad – and as for implementation, he recommended an innovative approach “that clearly shows to the peoples of the Sahel that it is no longer ‘business as usual’ for us.” In this regard, he firmly believed that the focus on peace and security in the Sahel should be through the development pillar of the strategy while enhancing coordination in the four spheres noted earlier.

Turning to specifics, he said that along with a focus on development and regional ownership, implementation would be driven by innovative resource mobilization. He recommended creating a Sahel Action Fund which will act as a platform for the resources to meet the needs of the Sahel which will be defined through the regional development projects. Donors, he said, will be free to choose the type of assistance and the peoples of the Sahel will know where the assistance is coming from.

In this regard, he said he has begun consultations with the African Development Bank, and will meet shortly with World Bank officials to explore the possibility of the two Banks co-leading the management of the fund with support from a pool of other international financial institutions such as the Islamic Development Bank, the European Bank of Investment and others, all of whom have already expressed their interest in participating in the endeavour.

“Here, I would also like to clarify that this resource mobilization will be in addition to the assistance required for ongoing humanitarian and development activities of the United Nations in the region and I call upon the donor community to continue their assistance to those critical programmes,” Mr. Prodi said.

Finally, taking into account the necessity to bring about long-term sustainability through enabling the peoples and Governments of the Sahel, he has also recommended the establishment of a Sahel Research Institute which will be funded through the Action Fund. The institute would be located in the region, constitute a “light” administrative and management structure, and act as training facility to generate local expertise in issues confronting the Sahel.

“In conclusion, I would like to reiterate two messages – first, do not forget the Sahel or you will have more Malis if you do, and second, I appeal to the international community to be as generous to the Sahel as they were towards Mali,” he said.

UNESCO chief calls for investigation into murder of Ugandan journalist 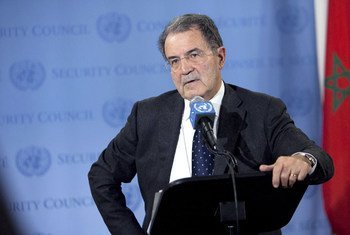 19 June 2013
The United Nations Special Envoy for the Sahel today welcomed the signing of the ceasefire accord between the Government of Mali and Tuareg rebels, and called on the parties to remain committed to peace for the sake of the country and the region.