“[Entrepreneurs] must be encouraged to stand at the frontline of socio-economic change, in the service of sustainable development,” the President of the General Assembly, Vuk Jeremić, said at the Thematic Debate on Entrepreneurship for Development in New York.

“They are the ones who are often best placed to take the first crucial steps towards breaking the cycle of poverty in their surroundings.”

Mr. Jeremić pointed that at the UN Conference on Sustainable Development (Rio+20) held last year in Brazil, countries recognized that Governments alone would not be able to achieve all commitments on sustainable development, and that the contribution of civil society and the private sector was crucial to innovation.

“I believe Governments should see the promotion of socially-conscious entrepreneurial spirit as a basic duty,” he said, adding that entrepreneurs must be given the means to leverage new technologies that will help move away from an economy that depends on carbon-based energy systems.

Entrepreneurs will also be able to contribute to the post-2015 development agenda, Mr. Jeremić said, through public-private partnerships that focus on improving the lives of the world's most disadvantaged people.

“I believe the post-2015 agenda will largely stand or fall on whether Governments will be able to work together with individuals who embody the spirit of socially-responsible entrepreneurship,” he said. “Our goal must be to establish a new form of global engagement.”

In his remarks, Secretary-General Ban Ki-moon emphasized the importance of supporting young entrepreneurs, many of whom are currently facing an economic crisis in their countries.

“To help meet this challenge, we should encourage, educate and empower young entrepreneurs.”

Countries should focus not just on creating better conditions for entrepreneurship but also invest in education and nurture young people, Mr. Ban said, adding that they will be the ones creating jobs and innovative solutions in the future.

“I call on all partners to support youth entrepreneurship, self-employment and youth-led businesses. The United Nations system will do its part. Our Global Compact initiative will continue mobilizing and supporting young entrepreneurs in advancing a more sustainable future,” he said, adding that the World Bank, the International Labour Organization (ILO) and the UN Capital Development fund are also working to foster youth entrepreneurship. 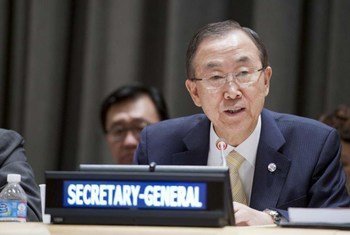 12 June 2013
Secretary-General Ban Ki-moon today appealed to Chinese and United States-based companies to boost their efforts to achieve sustainable development and prosperity through partnerships, stressing their impact in developing countries.