OHCHR
Torture victims undergo rehabilitation at the African Centre for the Prevention and Resolution of Conflicts, in Senegal. The centre is funded by the UN Voluntary Fund for Victims of Torture.

26 June 2013
To mark the International Day in Support of Victims of Torture, Secretary-General Ban Ki-moon joined with United Nations independent human rights experts urging Member States to step up efforts to promote a victim-centred approach which includes access to redress and rehabilitation services.

To mark the International Day in Support of Victims of Torture, Secretary-General Ban Ki-moon joined with United Nations independent human rights experts urging Member States to step up efforts to promote a victim-centred approach which includes access to redress and rehabilitation services.

“Let us work together to end torture throughout the world and ensure that countries provide reparation for victims,” the Secretary-General said in his message for the Day, urging all Member States to accede to and fully implement the Convention against Torture and to support the UN Voluntary Fund for Victims of Torture.

Noting that this is the Committee against Torture's 25th anniversary, Mr. Ban said that the Geneva-based body – along with other UN human rights mechanisms such as the Subcommittee on Prevention of Torture and the Special Rapporteur on Torture – is vital to strengthen a victim-oriented approach that also includes a gender perspective.

“This effort was further strengthened by the adoption this year of a UN Human Rights Council resolution focussing on the rehabilitation of torture victims,” he said, urging countries to step up their efforts to assist all those that have not only suffered from torture, but all cruel, inhuman and degrading treatment or punishment.

Joining the Secretary-General's call to action today is a group of UN independent human rights experts, who emphasized that all too often traumatized victims struggle to obtain the physical and mental rehabilitation, justice and compensation to which they are entitled.

“Torture unfortunately continues to be practiced in many countries, made possible by the dehumanization of the victim, torturer and society at large,” said Claudio Grossman, Chair of the Committee against Torture, which last November issued a landmark definition on the right to reparation for victims.

In a news release issued by the UN Office of the High Commissioner for Human Rights (OHCHR), he was supported by the Subcommittee on Prevention of Torture, the Special Rapporteur on Torture and other cruel, inhuman or degrading treatment or punishment, the Special Rapporteur on the promotion of truth, justice, reparation and guarantees of non-recurrence, as well as the Board of Trustees of the UN Voluntary Fund for Victims of Torture.

The release points out that victims have the enforceable right to reparation that includes fair and adequate compensation and access to as full rehabilitation as possible. States must also ensure victims are not exposed to further risk of ill-treatment and ensure violations are investigated and punished.

The Committee's stance was reinforced in March by a Human Rights Council resolution that called on States to not only provide redress for victims of torture but to ensure they are fully involved in the process to help them rebuild their lives and reintegrate into society.

“A victim-centred approach requires individual assessment of the victim's needs and treatment that goes beyond the short term,” said Special Rapporteur on torture Juan E. Méndez, adding that a holistic approach is crucial to “ensure professionals work with, rather than on, a person who has been tortured.”

Another key duty on States, the experts stress in the news release, is to tackle impunity and strengthen judicial proceedings to prevent torture from continuing.

“Effective redress is not possible without States addressing impunity,” said Pablo de Greiff, Special Rapporteur on the promotion of truth, justice, reparation and guarantees of non-recurrence.

“In addition to receiving reparation, it is crucial for victims to be involved in truth-seeking exercises, and in judicial processes to ensure effective and impartial investigations, prosecutions and judgements that reflect the gravity of the offence. It is also central for societies to put institutions and mechanisms in place to prevent future violations,” he said.

Rehabilitation of victims is key not only for the individuals affected but for society as a whole, according to Malcolm Evans, Chair of the Subcommittee on the Prevention of Torture which conducts field visits to places of detention.

“Wherever and whenever torture and ill-treatment occur, a meaningful prevention implies prevention for the victims and their relatives. Our committee has learned from direct experience the central role that rehabilitation occupies in the cycle of prevention,” he said.

The focus on a victim-oriented approach also highlights the need for properly resourced rehabilitation centres, the experts say.

The Fund, which relies on voluntary contributions from governments, the private sector and individuals, has seen its donations drop to $8.4 million in 2012 – a 30 per cent decrease since 2008. Its donor base has also shrunk from 38 donors in 2008 to 22 in 2012.

“Too many governments are cutting back on this in the light of economic problems,” said Mercedes Doretti, a forensic anthropologist who chairs the Fund's Board of Trustees. Ensuring prompt and proper treatment for victims of torture can reduce the financial cost to the state, she noted.

“We strongly hope that this renewed focus on victims' redress and rehabilitation will translate into more resources being made available to respond to thousands of torture victims,” said Ms. Doretti. 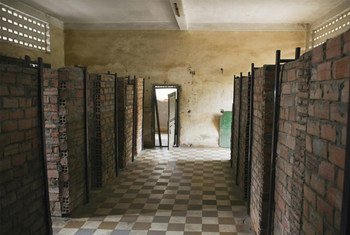 26 June 2012
United Nations Secretary-General Ban Ki-moon today called on countries to provide concrete support for victims of torture and prove their commitment to fighting a cruel and dehumanizing practice that remains pervasive.