25 June 2013
An international conference to find a political solution to the Syria crisis is not likely to be held in July, the Joint Special Representative of the United Nations and the Arab League for Syria, Lakhdar Brahimi, said today.

“Frankly now, I doubt whether the conference will take place in July,” Mr. Brahimi said ahead of talks in Geneva with Russian Deputy Minister of Foreign Affairs, Mikhail Bogdanov and US Under Secretary of State for Political Affairs, Wendy Sherman.

This meeting, the first since the officials last met on 5 June, is due to pave the way for a potential conference aimed at finding a political settlement to the fighting between the Syrian army and opposition forces seeking to oust President Bashar Al-Assad, which since March 2011 has claimed more than 93,000 lives and sent some 1.5 million people fleeing to neighbouring countries for safety.

The representatives will be assessing what needs to be done “to create the right conditions for the Geneva Conference on Syria to take place with the best chances of success,” including the best time for it to be held, who should participate, how it should be structured and some of the questions to be discussed.

The Government of Syria has said it would attend such a conference, Mr. Brahimi said, while the opposition is expected to next meet on 4 or 5 July and would not be ready for an international conference that same month.

Mr. Brahimi said that while today’s trilateral meeting would not resolve all the basic questions, “I am confident that our discussions will be constructive and I am also confident that we will make progress.”

A reporter asks the Joint Special Representative of the UN and the League of Arab States for Syria a question. UN Photo/Jean-Marc Ferré

Wendy R. Sherman, Under Secretary of State for Political Affairs of United States of America arrives for the talks at the Palais des Nations. UN Photo/Jean-Marc Ferré

A wide view of the meeting at the Palais des Nations in Geneva. UN Photo/Jean-Marc Ferré

The situation on the ground in Syria “has hardly improved” since the June meeting, the envoy noted. “It is still relentless destruction, killing, more suffering, more injustice, and more uncertainty for the future of the Syrian people.”

There are also signs that the conflict is spreading across the border to neighbouring countries.

In Lebanon, more than 50 people were killed in clashes that broke out on 23 June between the army and supporters of a Sunni cleric in the southern city of Sidon, Mr. Brahimi said.

He added his voice to the condemnation by Secretary-General Ban Ki-moon, UN Special Coordinator for Lebanon Derek Plumbly and the ambassadors of the permanent five Security Council members – China, France, Russia, the United Kingdom and the United States.

“I naturally strongly support the statement of the Secretary-General, and I express my personal support to President Michel Sleiman, to the Lebanese Army and to all those who are acting to contain this very serious crisis in their country,” Mr. Brahimi said. 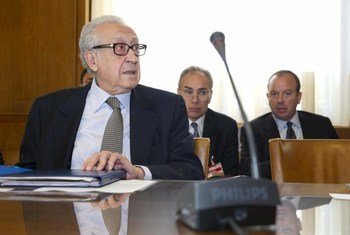 5 June 2013
Further steps have been taken towards the convening of an international conference on Syria but it will not be possible to hold it this month as planned, the Joint Special Representative of the United Nations and the Arab League for Syria, Lakhdar Brahimi, said today.