24 June 2013
Secretary-General Ban Ki-moon is following with deep concern the latest developments in the southern city of Sidon, where attacks on the Lebanese Armed Forces have led to serious losses in the army, his spokesperson today said.

“The Secretary-General reminds all concerned in Lebanon of their responsibility to avoid conflict and uphold the principles of mutual respect and coexistence in order to preserve Lebanon’s national unity,” the Spokesperson said in a statement.

Earlier today, a senior United Nations official and representatives of the five permanent members of the Security Council today unanimously deplored the events in Sidon.

Following a meeting this afternoon in Beirut, Lebanon between UN Special Coordinator for Lebanon Derek Plumbly and the ambassadors of China, France, Russia, the United Kingdom and the United States, all “were unanimous in deploring the recent challenge to the rule of law in Sidon and recent attacks on the Lebanese Armed Forces there and elsewhere,” according to UN spokesperson, Eduardo del Buey.

He added that they stressed the importance of the protection of civilians and “look forward to the early restoration of order in the city.”

According to media reports, fighting broke out between the army and supporters of a Sunni cleric in the southern city of Sidon on 23 June. Sectarian tensions in Lebanon are reportedly on the rise as a result of the conflict in neighbouring Syria.

In separate statements today, Mr. Ban, Mr. Plumbly and the Council ambassadors urged unified support for Lebanon’s President, Michel Sleiman, the institutions of the State and the security forces, and in particular, the army.

In March, Mr. Plumbly briefed the Security Council in a closed-door meeting at UN Headquarters in New York on Secretary-General’s latest report on resolution 1701.

That resolution, which ended the 2006 war between Israel and the Lebanese group Hizbollah, calls for respect for the Blue Line, the disarming of all militias in Lebanon, and an end to arms smuggling in the area. While the resolution has largely been respected since the war ended, there has been little progress towards an envisaged permanent ceasefire.

Council members have expressed their deep concern at the impact of the ongoing Syrian crisis on Lebanon’s stability.

Secretary-General appalled by killing of foreigners in northern Pakistan 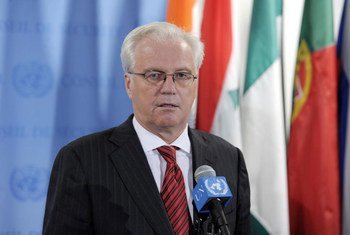 14 March 2013
The Security Council today said it was encouraged by the prevailing calm across the so-called ‘Blue Line’ between Israel and Lebanon, while also stressing the need for all Lebanese parties to refrain from any involvement in the crisis in neighbouring Syria.