Children’s issues as well as their voices and participation will be crucial to achieve sustainable development, says a paper released today by the United Nations Children’s Fund (UNICEF), which stresses that investing in the well-being of the world’s youth is essential to make progress on the post-2015 development agenda.

Children’s issues as well as their voices and participation will be crucial to achieve sustainable development, says a paper released today by the United Nations Children’s Fund (UNICEF), which stresses that investing in the well-being of the world’s youth is essential to make progress on the post-2015 development agenda.

“Children and young people are the makers of a future sustainable world, and, measures of their progress will also be the markers of that world,” said UNICEF’s Senior Adviser on the Post-2015 Development Agenda, Richard Morgan.

“Their learning, their nutritional growth, their safety and confidence, their creativity and ideas – underpinned by freedom from fear, as well as freedom from want – will be the markers of how decisively we are moving to a sustainable future for all.”

According to UNICEF, children represent approximately one-third of the world’s population, and their rights and participation as part of a sustainable future are already guided by an extensive range of international conventions, treaties, and other legal instruments – including the Convention on the Rights of the Child.

In the position paper, UNICEF makes a direct link between what needs to be done for children today – particularly those most disadvantaged – and how this will affect the future of their countries.

For example, preventing stunting – which currently affects come 165 million children under five – would help break the cycle of poverty and increase a country’s gross domestic product (GDP) by at least two to three per cent every year, and save billions of dollars in healthcare costs and lost productivity.

Reducing children’s exposure to violence would also lessen their risk of transitioning into drug abuse, criminal, violent and other dangerous behaviours later in adolescence and in adult life. In addition, children are more vulnerable to environmental pollution as their bodies and brains are still developing, which should encourage countries to implement environmentally-friendly measures.

“The good news is that investing in children delivers big pay offs – for them, for their societies, and for the planet,” UNICEF said in a news release. “For example, a good quality education has major intergenerational impacts. A well-educated girl is likely to have greater personal earnings potential, be more likely to delay marriage and pregnancy and be more likely to access health service support, leading to lower rates of maternal mortality. Educated women tend to have fewer, healthier and more educated children.”

The paper also argues that empowering children and young people is important so they can be active participants and become effective guardians of a sustainable development world. 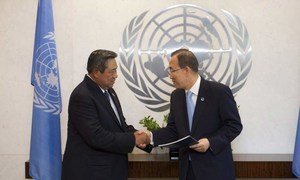 The world has an historic opportunity to eradicate extreme poverty and achieve sustainability and equality for all through the new post-2015 development agenda, Secretary-General Ban Ki-moon said today, launching a report that outlines a new framework to build on the Millennium Development Goals (MDGs).