The Security Council today sent a strong signal to perpetrators of sexual violence in conflict that their crimes will not be tolerated, adopting a new resolution to strengthen efforts to end impunity for a scourge that affects not only large numbers of women and girls but also men and boys.

In three previous resolutions – 1820 (2008), 1888 (2009) and 1960 (2010) – the Council affirmed that sexual violence, when committed systematically and used as a tool of war, is a fundamental threat to international peace and security, requiring an operational security and judicial response.

During a debate on women and peace and security, the 15-member body today unanimously adopted resolution 2106, by which it emphasized more consistent and rigorous investigation and prosecution of sexual violence crimes as a central aspect of deterrence, and ultimately prevention.

It emphasized that “effective steps to prevent and respond to such acts significantly contribute to the maintenance of international peace and security; and stresses women’s participation as essential to any prevention and protection response…”

The Council recognized the need for “more timely, objective, accurate and reliable information” as a basis for prevention and response, and requested Secretary-General Ban Ki-moon and relevant United Nations entities to speed up the establishment of monitoring, analysis and reporting arrangements on conflict-related sexual violence.

“Sexual violence, whenever and wherever it occurs, is a vile crime. It must be exposed and met with the anger and action that it deserves,” Mr. Ban said at the outset of the meeting, stressing that those who hold power and influence have a special duty to step forward and be part of a global coalition of champions determined to break this “evil.”

He recalled his recent visit to the Democratic Republic of the Congo (DRC), where he met women and girls who had been raped and maimed by armed groups on all sides of the conflict. While there are hospitals there to help these women, they cannot protect them, he said. “That is a job for the Congolese authorities and the international community, in particular this Council.”

Special Representative on Sexual Violence in Conflict, Zainab Hawa Bangura, speaks with other delegates on the margins of the meeting. UN Photo/Devra Berkowitz

William Hague, Foreign Secretary of the United Kingdom, whose delegation holds the presidency of the Security Council for the month of June, addresses the Council meeting. UN Photo/Devra Berkowitz

The Secretary-General’s Special Representative on Sexual Violence in Conflict, Zainab Hawa Bangura, noted that today, it is still largely “cost-free” to rape a woman, child or man in conflict. “But for the first time in history, we can reverse this reality. It will require leadership and political courage, and a relentless determination to match the cold, calculating brutality of those who would rape the innocent for military or political gain.”

She lauded today’s resolution, saying it reinforces a compliance-based regime based on reliable and timely information and analysis, and on the actions that must be taken at the political, strategic and tactical levels on the basis of such information.

“The resolve of this Council and the international community as a whole has set us firmly on the path of accountability and prevention,” she said. “We must stay the course, until we achieve the ‘critical mass’ of action that will turn the tide on history’s oldest and least condemned crime.”

The meeting, which is expected to hear from over 60 speakers, including several senior Government ministers, is being chaired by William Hague, Secretary of State for Foreign and Commonwealth Affairs of the United Kingdom, which holds the Council’s rotating presidency this month.

Mr. Hague, speaking in his national capacity, warned that if the international community does not address the culture of impunity surrounding conflict-related sexual violence, millions more women, children and men could well be subjected to the same appalling treatment now and in the conflicts of the future.

“The lead we set and the action we take, therefore, have the potential to save lives and change the course of events around the world, and nothing less than that should be our ambition… Together, it is time to say that rape and sexual violence used as a weapon of war is unacceptable, that we know that it can be prevented, and that we will act now to eradicate it…”

Also addressing the debate was actress and activist Angelina Jolie, the Special Envoy of the UN High Commissioner for Refugees (UNHCR), who emphasized that tackling war-zone sexual violence is the Council’s responsibility, as well as the duty of Governments in countries affected by it. And when Governments cannot act, the Council must step in and provide leadership and assistance.

“I understand that there are many things that are difficult for the UN Security Council to agree on. But sexual violence in conflict should be not be one of them,” she said. “That it is a crime to rape young children is not something I imagine anyone in this room would not be able to agree on.”

What was needed, she emphasized, was political will. Every country in the world is affected by sexual violence, and all countries have a responsibility to step forward. “But the starting point must be you, the UN Security Council – shouldering your responsibilities and showing leadership… If the Security Council sets rape and sexual violence in conflict as a priority, it will become one and progress will be made. If you do not, this horror will continue.”

Speaking from her experience as a lawyer and activist working to bring justice to victims of sexual violence in conflict, Jane Adong Anywar of the Women’s Initiatives for Gender Justice said that leadership on accountability for conflict-related crimes, including sexual violence, must be provided at the national level, with priority given to resourcing; adequate legislation prohibiting acts of sexual violence; and capacity building for police, investigators, lawyers and judges regarding the adjudication of these crimes.

♦ Receive daily updates directly in your inbox - Subscribe here to a topic.
♦ Download the UN News app for your iOS or Android devices.
sexual violence|conflict 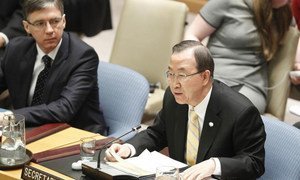 Conflict-related sexual violence, horrific in itself, is also an impediment to national reconciliation and development, top United Nations officials told the Security Council at the start of a day-long debate, urging increased political and financial pressure on those who commit, command or condone sexual violence in war zones.