Wrapping up his third visit to Sudan, Mashood Adebayo Baderin, Special Rapporteur on the human rights situation in Sudan, acknowledged the Government’s commitment to meet its international human rights obligations, but stressed that major challenges still need to be addressed.

In a press release issued by the UN Office of the High Commissioner for Human Rights (OHCHR), Mr. Baderin also urged the international community to provide technical assistance and capacity building to the Sudanese authorities.

On Darfur, Mr. Baderin highlighted the upsurge in inter-tribal conflict and clashes between the armed groups and Government forces which have resulted in a climate of insecurity and forced displacement.

“The effects of all these skirmishes in South Darfur have translated to an increase of new arrivals of displaced persons in different IDP [internally displaced persons] camps, including 4,500 new people in the Otash camp over the last one month and half alone,” said the expert. While visiting the camp, Mr. Baderin noted the terrible living conditions, especially for women and children.

“The tents are inadequate and most of the new IDPs have resorted to using local material to construct make-shift shelter. They need immediate help and attention to avoid a humanitarian disaster in view of the impending rainy season,” he stressed.

Mr. Baderin condemned the violations of human rights and humanitarian law perpetrated by parties to the conflict in South Kordofan, citing the shelling last Friday in the state capital, Kadugli, of a UN logistics base.

That incident, which was also condemned by UN Secretary-General Ban-Ki-moon and the members of the Security Council, left one Ethiopian peacekeeper dead and two injured as a result of the shelling on the base, which serves as a hub for the UN Interim Security Force for Abyei (UNISFA), an oil-rich area contested by South Sudan and Sudan.

Following a closed-door briefing yesterday to the Security Council in New York, Valerie Amos, UN Emergency Relief Coordinator, told reporters that she had drawn the 15-member body’s attention to the complex humanitarian situation in Sudan, where 4.4 million people needed assistance.

She said that in the past year, some 300,000 people had fled fighting in Darfur and in South Kordofan and Blue Nile states, and 1 million people were affected by the violence there with reports of shelling on all sides of the conflict.

For his part, Mr. Baderin said that rebel attacks in Abu Kershola, South Kordofan, and in UmRowaba, North Kordofan, seriously affected innocent civilians and resulted in human rights violations and displacements “which are very worrying.”

While noting some positive developments in Blue Nile state, including the significant improvement in humanitarian access to Government-controlled areas, he voiced concern about civilians trapped in rebel-controlled regions as a result of the fighting between national forces and armed groups.

“I have received reports that the humanitarian situation in these areas continue to deteriorate as a result of the belligerent activities of the parties to the conflict,” said the expert, adding that he had also been informed that many displaced and vulnerable civilians have been forced to move further south without access to basic necessities such as water and food.

Welcoming the launch of a ten-year National Action Plan on Human Rights on 19 June, he acknowledged the Government’s commitment to meet its international human rights obligations and the release of some opposition political detainees since his last visit.

At the same time, Mr. Baderin reiterated his call for the Government to protect the rights to press freedom, as well as the freedoms of expression and assembly. “These rights are integral to the creation of an enabling environment that allows for civic participation in the country…without fear of reprisals from authorities,” he said.

Independent experts, or special rapporteurs, are appointed by the Geneva-based UN Human Rights Council to examine and report back, in an unpaid capacity, on specific human rights themes. Mr. Baderin will present his findings and recommendations in a comprehensive report to the Council in September 2013. 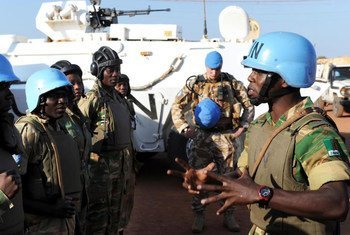 14 June 2013
Secretary-General Ban Ki-moon today condemned in the strongest terms the shelling on a United Nations logistics base in Sudan’s South Kordofan State which killed at least one UN peacekeeper and wounded two others.