21 June 2013
Tajikistan’s Pamir Mountains, the Hill Forts of Rajasthan and the Namib Sand Sea are among the eight natural and man-made wonders included as of today in the United Nations educational and cultural agency’s World Heritage List.

Tajikistan’s Pamir Mountains, the Hill Forts of Rajasthan and the Namib Sand Sea are among the eight natural and man-made wonders included as of today in the United Nations educational and cultural agency’s World Heritage List.

The UN Educational, Scientific and Cultural Organization’s (UNESCO) World Heritage Committee, meeting through the end of the month in Cambodia, is reviewing 32 proposed sites and reviewing several already on the list.

The Mountains of the Pamirs in Tajikistan are formed by the Himalayas, Tianshan, Karakoram, Kunlun and the Hindu Kush ranges. They are among the highest mountains in the world and referred to as the “Roof of the World.” The site is Tajikistan’s first natural World Heritage site.

The Namib Sand Sea in Namibia was also honoured for the first time with an inscription to the natural site list as the only coastal desert in the world that includes extensive dune fields influenced by fog.

In India, the UN committee included six forts in Chittorgarh; Kumbhalgarh; Sawai Madhopur; Jhalawar; Jaipur, and Jaisalmer representing the power of the Rajput princely states dating between the 8th and 18th centuries. The sites include temples and other sacred buildings, as well as a water harvesting structure.

Also today, the Committee included Italy’s Mount Etna, the most active stratovolcano in the world that has continuously pumped ash and lava on Sicilian neighbours as far back as 500,000 years.

“The diverse and accessible range of volcanic features such as summit craters, cinder cones, lava flows and the Valle de Bove depression have made the site a prime destination for research and education,” the UN agency said on its website.

From Mexico, the Committee selected El Pinacate and Gran Desierto de Altar Biosphere Reserve, already a UNESCO Biosphere Reserve, for its “dramatic beauty” and “great scientific interest”. Describing the site, the UN agency wrote that its dunes “emerge like islands from the sea of sand and harbour distinct and highly diverse plant and wildlife communities.”

In China, members agreed on the Xinjiang Tianshan, which comprise Tomur, Kalajun-Kuerdening, Bayinbukuke and Bogda, as part of the Tianshan mountain system of Central Asia which are also part of the Pamirs.

The Committee also decided to inscribe Kenya’s Lewa Wildlife conservancy, an extension to the Mount Kenya National Park which houses the continent’s second largest peak and a migration route for elephants.

On the border between Poland and Ukraine, the UN agency today bestowed the World Heritage honour on 16 wooden churches known as tserkvas build of horizontal wooden logs between the 16th and 18th centuries by communities of the Eastern Orthodox and Greek Catholic faiths.

“The tserkvas bear testimony to a distinct building tradition rooted in Orthodox ecclesiastic design, interwoven with elements of local tradition, and symbolic references to their communities’ cosmogony,” UNESCO said.

Additions to the World Heritage List are expected to continue tomorrow as the Committee continues to meet in Phnom Penh. 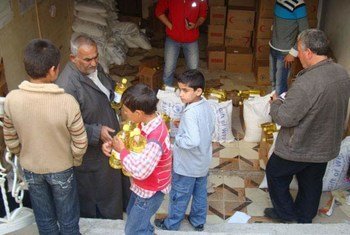 25 June 2013
Deteriorating living conditions have forced some Syrians to beg or, to save money, eat the same food for every meal, the United Nations emergency food assistance agency said today following interviews with families in various parts of the war-riven country.