“Without enough safe water and sanitation, the likelihood that children in Syria and those living as refugees around the region will fall sick with diarrhoea and other diseases is certain to rise,” said Maria Calivis, UNICEF Regional Director for the Middle East and North Africa.

In Syria, the availability of safe water is one third what it was before the crisis. Many of the civilians displaced by the conflict live in overcrowded shelters with insufficient access to toilets and showers. Sewage systems are damaged or overwhelmed by the increase in displaced populations, the agency stated in a news release.

In refugee camps like Domiz in Iraq – expanded to accommodate around 25,000 people but now hosting almost twice that number – conditions are just as severe. In Jordan’s Za’atari camp, aid agencies are struggling to meet the needs of what is now the world’s second biggest refugee camp, housing at least 120,000 people.

In Lebanon, more than half a million refugees are scattered in host communities and in informal tented settlements, placing increased pressure on existing water and sanitation services. Multiple families often share small apartments or live in makeshift settlements that lack access to safe water, basic toilets and waste collection. Women and children often have to walk long distances to collect water that in many cases may be unfit for drinking, UNICEF noted.

There are some 6.8 million people in need of humanitarian assistance as a result of the fighting between the Syrian army and opposition forces seeking to oust President Bashar Al-Assad. The crisis, which began in March 2011, has claimed more than 93,000 lives and sent some 1.5 million people fleeing to neighbouring countries for safety.

The agency warns, however, that funding constraints remain an issue. “Providing water, sanitation and hygiene services to those affected by this crisis is our most costly operation – but one of the least funded,” Ms. Calivis said.

UNICEF needs more than $200 million for its water, sanitation and hygiene programmes in Syria, Lebanon, Jordan and Iraq until the end of the year. Nearly half way through the year, it remains $124 million short of this target.

Even as UN agencies and their partners are working to assist those in need, civilians continue to bear the brunt of the conflict. Yesterday, Under-Secretary-General for Humanitarian Affairs Valerie Amos told reporters that the violence and “complete disregard for human life and dignity” had reached “unprecedented” levels during recent weeks.

Just a couple of days ago, at least five Palestinian refugees were killed when mortar shells struck a school run by the UN Relief and Works Agency for Palestine Refugees in the Near East (UNRWA) in a camp outside of Damascus. Eleven people – including an UNRWA staff member – sustained injuries in the incident. One more refugee was killed in another area of the camp.

“UNRWA fervently appeals to all sides and the international community to resolve the Syria conflict through a peaceful process of mediation and dialogue,” the agency said in a statement.

As part of ongoing efforts to find a political solution to the crisis, Russia, the United States and the UN will reconvene in Geneva on 25 June to continue discussions on the holding of an international conference on Syria.

The UN delegation will be headed by the Joint Special Representative for Syria, Lakhdar Brahimi, who earlier this month stressed that a political solution is the only way to resolve the crisis. “The catastrophe on the ground is alarming,” he had stated. “That tragedy has got to come to an end, for the sake of Syria and its people.”

Also urging a negotiated political solution was Paulo Pinheiro, the Chair of the UN-mandated Commission of Inquiry on Syria, who stressed the need for a “diplomatic surge” to end the conflict.

“Syria is in freefall,” Mr. Pinheiro told reporters in New York after briefing members of the Security Council on the Commission’s latest report. “Crimes that shock the conscience have become a daily reality in Syria. Humanity has been the casualty of this war. This is the price of the international collective failure to end this conflict.”

The delivery of arms, he added, will only push the parties further into conflict and farther away from the negotiating table. “Those arms will contribute to the escalation of war crimes and gross human rights violations,” he warned, adding that there is no military solution to the crisis. 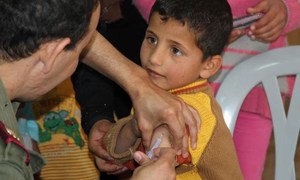 The United Nations Children’s Fund (UNICEF) and partners have stepped up vaccination campaigns in Syria, Jordan, Lebanon, Iraq and Turkey amid measles outbreaks in a region already struggling to provide humanitarian assistance to millions of people affected by ongoing conflict in Syria.