Mr. Laborde, who will serve at the level of Assistant Secretary-General, will succeed Mike Smith of Australia, who held the position since 2007 and to whom the Secretary-General expressed his deep gratitude for his dedication and able leadership.

The position was established by the Security Council in 2004 to bolster the 15-member body’s ability to monitor the implementation of a landmark resolution adopted in the wake of the September 2001 attacks on the United States, which calls on countries to adopt a number of measures to enhance their ability to counter terrorist activities nationally, regionally and globally.

The Council also intended the Executive Director post to improve Member States counter-terrorism capacities by facilitating the provision of technical assistance as well as promoting cooperation and coordination with international, regional and sub-regional organizations.

Mr. Laborde currently serves as Judge of the Criminal Chamber of the French Judicial Supreme Court (Cour de Cassation). During 22 years of senior-level responsibilities in various branches of the French criminal justice system, Mr. Laborde acted as President of the Chamber of the second French Court of Appeals (Aix-en-Provence), Head of National Service for Inspection of Penitentiary Services of France, Chief Prosecutor, Assistant Prosecutor-General and Judge.

During his 17 years of United Nations service, Mr. Laborde held positions as Senior Advisor to the Under-Secretary-General for Political Affairs, Department of Political Affairs, in Charge of Counter-Terrorism Affairs (2009-2010); and Director and Chairperson of the Counter-Terrorism Implementation Task Force (2010-2011). He also served as Interregional Advisor on Crime Prevention and Criminal Justice at the UN Office on Drugs and Crimes (UNODC).

Also today, the Secretary-General and the Chairperson of the African Union Commission, Nkosazana Dlamini Zuma, appointed Joseph Mutaboba of Rwanda as the Deputy Joint Special Representative in Darfur and Deputy Head of the AU-UN Hybrid Operation (UNAMID).

Mr. Mutaboba will replace Aichatou Mindaoudou of Niger. Mr. Ban expressed his deep appreciation to Ms. Mindaoudou for her “tireless dedication and invaluable service” during her tenure in UNAMID, according to the announcement of the appointment.

The new deputy head of UNAMID brings to his new position extensive experience after a long career in diplomacy and foreign affairs, most recently serving as the Secretary-General’s Special Representative for Guinea-Bissau and Head of the UN Peacebuilding Support Office there (UNOGBIS) until January 2013.

He previously served as the Rwandan President’s Special Envoy to the Great Lakes Region, and as Secretary-General in the Ministries of Foreign Affairs and Internal Affairs. Earlier, he held several senior-level positions as the Deputy National Coordinator for Rwanda, the Permanent Representative to the United Nations from 1999 to 2001 and as a senior diplomat in Addis Ababa and Washington, D.C. 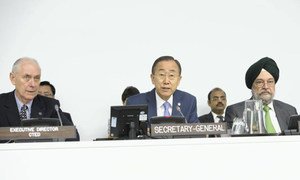 The United Nations committee entrusted with helping countries tackle terrorism today voiced concern at the close connection between terrorists and transnational organized crime, including the illegal movement of nuclear, chemical, biological and other potentially deadly materials.