Sustained international support is critical as Afghanistan proceeds with three complex and intertwined transition processes – political, security and economic – that are due to culminate next year, the top United Nations envoy to the country told the Security Council today.

“The very core of transition is strengthening Afghan national ownership and leadership. The onus for driving progress is thus on the Government of Afghanistan and the country’s leading political forces,” said Ján Kubiš, the Secretary-General’s Special Representative for Afghanistan.

“There is, however, a clear need [for] sustained and predictable international support through 2014 and beyond in ways that reinforce Afghanistan’s leadership,” he added.

Briefing the Council on Secretary-General Ban Ki-moon’s latest report and the situation on the ground, Mr. Kubiš noted that Afghan security forces have entered the last phase in assuming the lead responsibility for security throughout the country.

“Anti-Government elements are, however, seeking to counter this by targeting security personnel and terrorizing civilians,” he said. “They aim to shake the population’s confidence in the Government and its armed forces.”

From the beginning of the year until 6 June, more than 1,000 civilians have been killed and more than 2,000 injured, which is a 24 per cent increase in civilian casualties compared to the same period in 2012.

“At the same time, the Afghan forces, notably the National Army, still require critical enablers such as air capacity to ensure their effectiveness and sustainability. It is for the international community to assist.”

In his report, Mr. Ban highlights a range of issues including an urgent need to finalize electoral legislations and appointments to Afghan electoral institutions for a timely presidential election next year, which will mark the political transition.

“A legitimate succession in leadership is key to the political transition,” he writes, adding that delays in the passage of electoral laws have added uncertainty among Afghan stakeholders over the intention of holding timely elections using a sound process that would provide a level playing field for all candidates.

Echoing those concerns, Mr. Kubiš said that the two pieces of legislations governing the legal framework of future elections that are being discussed at various levels should be finalized without delay.

The first of the two laws defines the structure and responsibilities of the country’s Independent Election Commission (IEC), while the second concerns the main electoral law governing all future Afghan elections. The laws are expected to create a strong legal foundation for the holding of credible polls in Afghanistan, and their passing is reportedly tied up due to differences over provisions contained within them.

Also on the political front, Mr. Kubiš expressed the hope that the current controversies and concerns around the Taliban office in Doha will soon be solved. He added that the UN Assistance Mission in Afghanistan (UNAMA), which he heads, stands ready to support all peace and reconciliation efforts based on and in full conformity with its mandate. 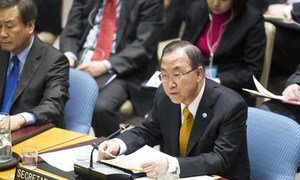 The Security Council today extended the mandate of the United Nations mission in Afghanistan for another year, after Secretary-General Ban Ki-moon and other speakers urged continued UN support to the Government as it assumes full responsibility in most areas by 2014.