UNHCR/O. Laban-Mattei
UNHCR Special Envoy Angelina Jolie (right) records the stories of refugees who have just escaped the war in Syria at the Jaber border crossing in Jordan on 18 June 2013.
19 June 2013

Urging the international community to scale up aid to Syrian refugees, Oscar-winning actress Angelina Jolie, Special Envoy for the United Nations refugee agency, today said that the two-year conflict in Syria had sparked “the worst humanitarian crisis of the 21st century.”

“The international response to this crisis falls far short of the vast scale of this human tragedy,” declared Ms. Jolie, who travelled to the Jordan-Syria border to sound the alarm about the staggering number of people forced to their flee their homes – estimated by the UN High Commissioner for Refugees (UNHCR) at some 1.6 million, 540,000 of whom are in Jordan.

Along with Jordan, other countries hosting refugees sparked by two years of fighting between the Syrian Government and forces seeking to oust President Bashar Al-Assad include Lebanon, Turkey, Iraq and Egypt. UNHCR estimates that the number of refugees could reach almost 3.5 million by the end of this year.

The conflict has also left more than 93,000 people dead and another 6.8 million in need of humanitarian assistance. Earlier this month, UNHCR updated the amount of funds needed for the Syria Regional Response Plan to almost $3 billion for international agencies and non-governmental organizations (NGOs). An additional $830 million is needed for the Governments of Jordan and Lebanon.

Making her visit to the region just ahead of World Refugee Day, marked annually on 20 June, Ms. Jolie listened to the stories of men, women and children who had fled Syria just hours before. In a press release, the agency said that the envoy arrived in the country yesterday with UN High Commissioner for Refugees António Guterres.

Mr. Guterres started his visit to the region in Lebanon, where he met with refugees and Government officials. In Jordan, he and Ms. Jolie plan to meet with Government representatives and refugees living in Jordan’s cities, as well as in the sprawling Za’atari refugee camp.

“Much more humanitarian aid is needed, and above all, a political settlement to this conflict must be found,” Ms. Jolie said, urging the world to do much more to help the people of Syria.

♦ Receive daily updates directly in your inbox - Subscribe here to a topic.
♦ Download the UN News app for your iOS or Android devices.
syria|refugee 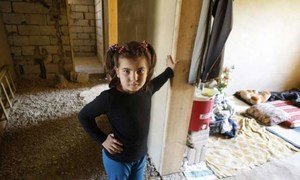 The United Nations refugee chief today urged greater support for those who have fled the conflict in Syria and for the countries hosting them, as he kicked off a visit to the region in Lebanon, where the pressure on local communities has become “overwhelming.”