19 June 2013
Governments bear the primary responsibility to ensure that natural resources do not fuel conflict by ensuring that land and mineral wealth are managed wisely, transparently and yield benefits for the people, senior United Nations officials stressed today in the Security Council.

“In too many countries, a wealth of resources – such as timber, oil, coal, diamonds and precious metals – fail to translate into equivalent wealth for the people,” said Deputy Secretary-General Jan Eliasson in his remarks to the Council’s day-long thematic debate on conflict prevention and the extractive industries.

Instead, communities and individuals pay a terrible cost in terms of corruption, human rights abuses and environmental damage, he said, emphasizing: “The primary responsibility for preventing conflict and transparently and equitably managing resources lies with Governments.”

Mr. Eliasson noted that when managed properly, extractive resources do not need to be a ‘curse’ but can instead be the foundation for sustainable development and lasting peace.

“Political leaders are to ensure that extractive industries generate employment and tax revenues which support economic development and the provision of basic services,” he said. “And leaders are to be held accountable by national institutions which promote social cohesion and inclusion, based on rule of law and an independent judiciary.”

He added that while Governments play a central role in natural resource management, the private sector, civil society and international organizations are also important in ensuring the equitable, transparent and sustainable exploitation of extractive resources.

Mr. Eliasson highlighted examples of how the UN is working with Governments to prevent conflict related to resources. UN political and peacekeeping missions, for example, support dispute resolution through their rule of law programmes, which count with mediators with an expertise on natural resource issues.

In addition, the world body is working with financial institutions to develop capacity on taxation policies and regulations pertaining extractive industries to address the impact of inflation and currency fluctuations, Mr. Eliasson said.

“Ultimately, all parties need to recognize – and act upon – the links between poverty, inequality, conflict and sustainable development,” he said. “As demand for extractive resources increases, so will competition and rivalry. This must not lead to more violent conflicts in fragile nations but, rather, to cooperation and a sense of shared responsibility.”

In his capacity as Chairperson of the Africa Progress Panel, former UN Secretary-General Kofi Annan told the Council that conflict related to extractive resources is preventing many African countries from developing their full potential.

“For years, we have seen that natural resources have been a presence in – and at times a driver of – internal of regional conflicts in Africa,” Mr. Annan said.

He said that Africa has been benefiting from high demand for natural resource from China and other emerging markets, but warned that Governments must ensure the profits of this demand are invested in development and do not lead to tensions in the region.

“The starting point is for all countries to develop national strategies that set up the terms under which their natural resources will be developed, including fiscal policies, contractual arrangements and tax regimes,” he said.

“Above all, national strategies have to set out how the extractive sector fits with plans for poverty reduction, inclusive growth and social transformation.”

The Associate Administrator of the UN Development Programme (UNDP), Rebecca Grynspan, outlined how the agency is helping countries such as Tanzania, Liberia and Sierra Leone to establish concrete actions plans and best practices to manage their resources.

The agency is working not just with Governments, but also with communities and civil society groups to diffuse tensions and address misunderstandings that could lead to conflict.

Managing Director of the World Bank Caroline Anstey also addressed the Council, and stressed the importance of transparency, and collaboration with the private sector. 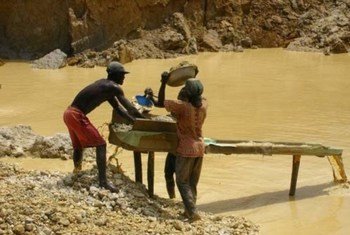 27 May 2013
Africa must tap into its agricultural, mining and energy resources to boost its economic growth, argues a new report released in Morocco today by the United Nations and its partners.