With thousands of people in the Marshall Islands without access to safe drinking water, the head of the United Nations office for disaster risk reduction today warned that Pacific small islands are threatened by drought and need to incorporate mitigation measures into their national planning and risk assessments.

“The worsening situation in the Republic of the Marshall Islands is a strong warning for the whole of the Pacific of the potential suffering that drought brings, particularly as many [of the region’s] islands have limited water supplies,” said the UN Office for Disaster Risk Reduction’s (UNISDR) Asia-Pacific head, Jerry Velazquez.

“We mainly think about sea level rise and cyclone risks when we talk about small island developing states (SIDS) but drought is also threatening thousands of communities,” he added, urging better use of weather forecasts and improve rain water harvesting.

The recommendation is in line with the UN 2013 Global Assessment Report on Disaster Risk Reduction focusing on how climate change will magnify the disaster risk in SIDS around the world.

Some 6,700 people in the Marshall Islands are without safe water leading authorities to declare a “state of drought disaster.” Major rain water supplies have been exhausted, according to UNISDR. Well water has become so salty that it is unusable and crops have started dying off.

The drought will be among the issues discussed by delegates gathering for the Joint Pacific Platform for Disaster Risk Management and Pacific Climate Change Roundtable in Nadi, Fiji, 8-11 July.

Around 250 delegates, including representatives from various Pacific Islands, are scheduled to attend the Joint Meeting in Fiji to pave the way for a successor to the Hyogo Framework for Action (HFA). It is the first plan to explain, describe and detail the work that is required from all different sectors and actors to reduce disaster losses.

The HFA outlines five priorities for action, and offers guiding principles and practical means for achieving disaster resilience. Its goal is to substantially reduce disaster losses by 2015 by building the resilience of nations and communities to disasters.

Since 2005, 121 countries have enacted legislation to establish policy and legal frameworks for disaster risk reduction. 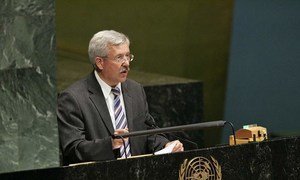 Japan will host the world conference slated to be held in 2015 at which countries will adopt the successor to the current global blueprint for disaster risk reduction efforts, it was announced today at a United Nation forum on the issue that wrapped up in Geneva.