The United Nations General Assembly will begin today its consideration of the impacts that the increasing acidification of the world's oceans will have on the marine environment and on people.

This year's informal Consultative Process on oceans, which opens today and runs through 20 June, will provide a forum for countries to discuss the challenges posed by rising ocean acidity due to increased carbon emissions from human activities.

By absorbing increased amounts of atmospheric carbon dioxide caused by human activities, oceans are becoming more acidic— by more than 30 per cent—since the beginning of the Industrial Revolution 250 years ago, according to data cited in a report by Secretary-General Ban Ki-moon to the General Assembly.

It is predicted that by 2050 ocean acidity could increase by 150 per cent, a rate of increase that is 100 times faster than any change in acidity experienced in the marine environment over the last 20 million years.

In a message for the recently observed World Oceans Day, Mr. Ban said: “If we are to fully benefit from the oceans, we must reverse the degradation of the marine environment due to pollution, overexploitation and acidification.”

He added, “Let us work together to create new waves of action for ocean sustainability – for people and the planet.”

The General Assembly's Open-ended Consultative Process on Oceans and the Law of the Sea will be co-chaired by Ambassador Milan Jaya Nyamrajsing Meetarbhan of Mauritius and Ambassador Don MacKay of New Zealand. The Process, established in 1999, aims to identify areas where international coordination and cooperation on ocean issues should be enhanced.

Over the course of four days, the meeting will focus its discussions on the scientific and technical aspects of oceans acidification. Participants will hear presentations from more than a dozen scientists and researchers about the process of ocean acidification, its impacts and activities to address these impacts, and about how the issue may be more effectively addressed.

There is currently no global international instrument specifically dedicated to addressing ocean acidification. However, elements of the existing legal and policy framework are relevant, including first and foremost, the United Nations Convention of the Law of the Sea (UNCLOS), which celebrated its 30th anniversary in 2012 and requires States to protect and preserve the marine environment. 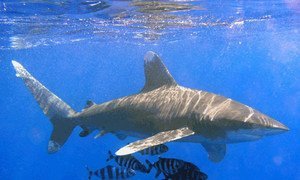 Marking World Oceans Day, United Nations Secretary-General Ban Ki-moon urged the international community to do more to reverse degradation of the marine environment, which influences virtually all aspects of life on the planet.