UN Photo/Kibae Park
A child practices his writing during a kindergarten class.

14 June 2013
Access to quality education has a significant role in preventing racism, xenophobia and other forms of discrimination, a United Nations independent expert said today.

“Education has a central role in creating new values and attitudes and provides us with important tools for addressing deep-rooted discrimination and the legacy of historical injustices,” said the Special Rapporteur on contemporary forms of racism, Mutuma Ruteere in his briefing to the Geneva-based Human Rights Council.

Mr. Ruteere said States must ensure that school curricula contains balanced information on the contribution of minorities, migrants and other non-dominant groups, and emphasized this is particularly relevant against a background of economic and social unrest.

“The rise in extremist political parties, movements and groups poses major challenges particularly in the context of the ongoing economic and financial crisis,” he warned.

“Racist, xenophobic, homophobic and other intolerant acts continue to be perpetrated by individuals or groups linked to extremist political parties or movements, against people of African descent, members of minorities such as Roma, foreign students, Jews, Muslims and migrants,” Mr. Ruteere said, adding that States must take decisive action against attempts by some extremist groups to falsify history.

States must also evaluate the impact of budget cuts on education at a time of economic crisis, particularly for disadvantaged minorities and groups, Mr. Ruteere said.

“I have found that despite some positive initiatives, studies and findings by international and national bodies show that persons of African descent, Roma, Dalits, indigenous peoples, migrants, to name a few, still have limited access to quality and higher education.”

Mr. Ruteere also submitted a report to the Council which addresses the latest developments he has identified regarding the continuing human rights and democratic challenges posed by extremist political parties, movements and groups, including neo-Nazis and skinhead groups.

This report examines the main areas of concern where further efforts and consistent vigilance against racist and xenophobic crimes are required. It also identifies good practices developed by States and different stakeholders.

Independent experts, or special rapporteurs, are appointed by the Council to examine and report back on a country situation or a specific human rights theme. They work in an unpaid capacity. 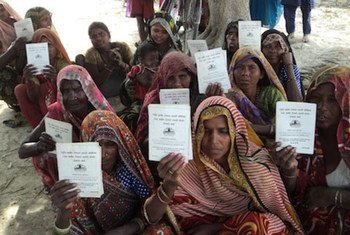 24 May 2013
More than 260 million people across the world are still victims of human rights abuses due to caste-based discrimination, United Nations independent experts warned today, urging South Asian countries to strengthen legislation to protect them.