13 June 2013
The United Nations food agency today called on “wheat belt” countries to step up monitoring and prevention for wheat rusts – fungal diseases that could affect yields across North Africa, the Middle East and South Asia, which account for more than 30 per cent of global output of the crop.

“The favourable growing conditions for wheat are also good for the rust diseases, so when there is good precipitation for wheat, that is also when wheat rusts will be able to best thrive and proliferate,” said Fazil Dusunceli, Agriculture Officer of the UN Food and Agriculture Organization’s (FAO) Plant Production and Protection Division.

“The ideal approach to prevent the rusts is to grow the right cultivars which are resistant to rust diseases. This minimizes the disease risks. In case of sudden epidemics, fungicide sprays can help to mitigate the effects of the disease, but only if they are caught at an early stage,” he added.

Wheat rusts manifest themselves as yellow, blackish or brown coloured blisters that form on leaves and stems, full of millions of spores. These spores, similar in appearance to rust, infect the plant tissues, hindering photosynthesis and decreasing the crop’s ability to produce grain.

Mr. Dusunceli underlined that monitoring should be increased particularly in Ethiopia and Kenya, where the growing season is underway and rains have been favourable.

“Although in lowlands in warmer areas the crop has fully matured or has been harvested, in highland areas and more mountainous regions, including Central and West Asia, there is still a risk of outbreaks, but there is still time to reduce the losses from yellow rust especially,” he said.

In previous years countries such as Afghanistan, Pakistan and Morocco have been severely affected by wheat rusts, and FAO emphasized the importance of efficient surveillance to prevent total crop loss.

The agency recently launched a pilot mobile phone surveillance system in Turkey, using smart phone and instant text messaging reporting technology. “The information is now instantaneous,” said Mr. Dusunceli, “and it is now funnelled directly into a database housed in the agriculture ministry. That data will give institutions the knowledge and early warning signs needed to react quickly.”

FAO, which has been running a global programme since 2008 to provide technical support to countries on this issue, added that to achieve sustained productivity, wheat rusts must be closely monitored as part of a global collective effort. 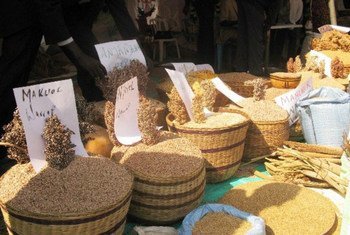