13 June 2013
Warning that recent clashes in the Golan Heights area are threatening the decades-long ceasefire between Syria and Israel and putting civilians and United Nations personnel at risk, Secretary-General Ban Ki-moon has recommended enhancing the self-defence capacity of the UN Mission there.

“Given the evolving security situation in the UNDOF area of operation, it is necessary to consider further adjustments to the posture and operations of the Mission,” Mr. Ban writes in his latest report to the Security Council on the UN Disengagement Observer Force (UNDOF). The Council is set to meet with the Forces’ troop contributing countries later today.

Citing spill over from the ongoing crisis in Syria, where Government and armed opposition groups are locked in a spiralling conflict which has in turn sparked tensions in the Golan between Syria and Israel, the Secretary-General recommends that the Council extend the UN force’s mandate for six more months, until December 31st.

Noting that the Governments of both Syria and Israel backed the mandate extension, Mr. Ban goes on to recommend that the Council consider, “as a matter of priority,” adjustments to UNDOF, including enhancing its self-defence capabilities and boosting its force strength by about 300 to some 1,250 troops.

These proposals come as UNDOF, which monitors the 1974 disengagement accord between Syria and Israel after their 1973 war, has faced a spate security risks and operational challenges.

Just last week, Security Council members expressed concern at the resurgence of fighting in the Golan Heights and at the prospect of countries withdrawing their troops from UNDOF. This followed the recent injury of two peacekeepers amid intense fighting in the area of separation.

Also, since early March UNDOF peacekeepers have twice been captured in the Golan Heights area and held for brief periods by armed groups. Each incident ended with the troops being released unharmed.

In addition, Austria – which contributes about one-third of UNDOF's troops – announced on 6 June its decision to withdraw its soldiers, reportedly citing a lack of freedom of movement and an unacceptable level of danger to its personnel.

Speaking to the press at UN Headquarters today, the Secretary-General’s Spokesman, Martin Nesirky, announced that, regarding Austria’s troop withdrawal, the Department of Peacekeeping Operations (DPKO) has requested the Austrian authorities to ensure that the Mission’s operational requirements and the possible negative impact on implementing the mandate.

“Specifically, [DPKO] formally requested Austria to complete the withdrawal of its personnel no earlier than the end of July to ensure a smooth transition with incoming troop-contributing countries and a continued UN presence in critical UNDOF positions such a Mount Hermon,” the Spokesman said.

In view of the difficult conditions on the ground, Mr. Nesirky said, Austria was also requested to leave all its equipment within UNDOF. “This equipment is essential to support remaining and incoming peacekeepers in the implementation of the Mission’s mandate, he continued, adding that DPKO is “urgently approaching possible troop contributing countries to replace Austria.”

“The Department of Peacekeeping Operations says that it trusts that Austria, given its long-standing and valuable contribution to the Mission, will keep the interest of the Mission at heart while withdrawing its personnel,” he said.

In his report, Mr. Ban calls on all parties to the Syrian conflict to cease military actions inside the country, including in the UNDOF area of operation. Further, he says the threats by Syrian leaders to act against Israel on the Golan undermine the Disengagement Agreement

Mr. Ban says also he remains “deeply concerned” about incidents involving UN personnel on the ground, and stresses that the safety of UN personnel is essential for UNDOF to continue to implement its mandate under difficult conditions.

“It is equally critical that the Security Council continue to bring its influence to bear on the parties concerned to ensure that UNDOF is accorded the ability to operate freely and securely within its area of operations in order to be able to carry out its important mandate,” the UN chief adds. 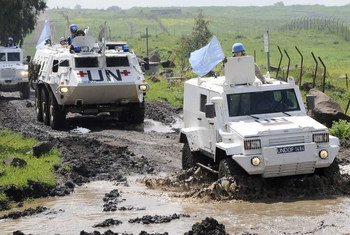 7 June 2013
Members of the Security Council today expressed their concern at the resurgence of fighting in the Golan Heights and at the prospect of countries withdrawing their troops from the United Nations peacekeeping mission tasked with monitoring the longstanding ceasefire between Israel and Syria.