12 June 2013
Despite progress to protect children living in war-affected countries, the evolving character and tactics of conflict are creating unprecedented threats for children, particularly in Syria, Mali and the Central African Republic, a top United Nations envoy today said.

Briefing reporters in New York on Secretary-General Ban Ki-moon’s latest report on children and armed conflict, his Special Representative on the issue, Leila Zerrougui, said: “In 2012, we have seen positive developments in some areas of the world, but also extremely worrying situations in places such as Syria, Mali and Central African Republic.”

The report reviews situations in these and 18 other countries, as well as the regional conflict involving the Lord’s Resistance Army (LRA) whose activities impact children in the Democratic Republic of the Congo, Central African Republic and South Sudan.

This year, the list includes 55 armed forces and groups from 14 countries, including 11 new parties in Central African Republic, DRC, Mali and Syria.

Two countries previously listed – Nepal and Sri Lanka – have been removed this year. In addition, new action plans have been signed with the DRC, Myanmar, Somalia and South Sudan, as roadmaps to potential delisting.

On Syria, Mr. Ban said in his annual report that the toll the conflict is taking on children is “unacceptable and unbearable,” and urging immediate measures to protect the lives and dignity of all children.

“I urge the Government immediately to cease bombardments of civilian areas,” Mr. Ban said in his report. “The Government should be held responsible for all grave violations committed by groups affiliated to it.”

“The use of terror tactics against the civilian population can also not be tolerated. In this regard, I urge all armed opposition groups to put an immediate end to these acts that cost the lives of children in the Syrian Arab Republic and to end the recruitment of children,” he stressed.

The office of the Special Representative received throughout 2012 verified reports that Syrian children are killed or injured in indiscriminate bombings, shot by snipers, used as human shields or victims of terror tactics, according to a news release from the office.

The report cites instances of children being detained and mistreated, including boys as young as 10 years of age recruited by armed groups to work as combatants, porters, messengers and to perform other support tasks.

“What we would like to do is to see these stop,” Ms. Zerrougui told the press. “We would like to see parties take their responsibility to respect the standards that govern war and to ensure that children are not paying such a high price and to preserve the lives of civilians in general and children in particular.”

The UN has also cited instances of schools in Syria under attack and limited access to lifesaving humanitarian assistance.

“Everyone involved in the conflict needs to take urgent measures to protect children,” Ms. Zerrougui said. “Allowing access for lifesaving humanitarian assistance is essential. We cannot allow innocent children to continue to die because they can’t see a doctor, or because they can’t fulfil their basic needs.”

In the press conference, the Special Representative said she plans to travel to the region later this month to follow-up on her visit last December. The visit will also include stops in Jordan, Iraq, Lebanon, Turkey and Syria.

Meanwhile, the UN Children’s Fund (UNICEF) today reiterated that all parties to armed conflict must do everything to ensure the safety of children and the protection of their rights.

In particular, the UN agency noted as “horrific” the continuing trend of schools being attacked and used for military purposes, including car and other bombs detonated near schools.

“In conflict, schools must be seen by children, parents and families as protected safe havens where children can learn and grow to their full potential, while benefiting from a sense of normalcy in a context that is anything but normal for children,” UNICEF said.

A reported 167 education personnel, including 69 teachers, were killed up to the end of February 2013 and 2,445 schools are reported damaged, the UN agency noted, adding that in some areas, children have not been to school in over 18 months.

In Mali, where children are more than half of the population, the UN cited instances of children “severely affected” by the conflict – killed, injured, as well as sexually assaulted and recruited by armed groups operating in the northern part of the country.

“The serious deterioration of the security situation in Mali in 2012 was characterized by a large number of grave violations against children by various armed groups,” according to Secretary-General Ban’s report.

Hundreds of children, mainly boys between 12 and 15 years of age, were enlisted during the reporting period, mainly to man checkpoints and conduct patrols, while others joined out of poverty and religious affiliations.

The UN also received and looked into reports of sexual violence against girls which are believed to have been “widespread and systematic in northern Mali” since January 2012. At least 211 girls were raped, forced to marry or otherwise sexually abused.

Among other points related to Mali, there are dozens of reports of children being killed or maimed by weapons, mines and explosive remnants of war during the French and Malian military campaign initiated in January 2013, including during aerial bombardments.

“I am working to make sure that the deployment of a peacekeeping mission, in conjunction with the work of UN agencies and partners already on the ground, will allow us to improve our collective response to children’s needs,” Ms. Zerrougui said in the news release in reference to the UN Multidimensional Integrated Stabilization Mission in Mali, known as MINUSMA.

Meanwhile, in the Central African Republic (CAR), while the reporting period saw an overall decrease in the occurrence of grave violations against children, “all progress made earlier in the year has been erased” due to fighting resumed in December 2012 between the Government and the Séléka coalition, Ms. Zerrougui said.

Although these developments do not fall within the reporting period, the progress achieved and the violations committed in 2012 need to be placed against the backdrop of the recent deterioration of the security situation, it further noted.

In addition to the Séléka coalition, the Lord’s Resistance Army (LRA) was also responsible for a series of abuses against children, including the majority of the at least 41 cases of recruitment of children.

Ms. Zerrougui said that half of the country’s schools are closed and access to humanitarian assistance is extremely limited due. More than 2 million children do not currently have access to basic services.

In her presentation today, the Special Envoy highlighted the importance of developing partnerships with regional and sub-regional organizations to promote adequate protection for children affected by conflict.

She also stressed the importance of ending impunity for grave violations against children.

“International justice must step in when national courts lack the capacity or willingness to bring alleged perpetrators to justice,” said Ms. Zerrougui. “But it’s essential that we support Governments to reduce the accountability gap.” 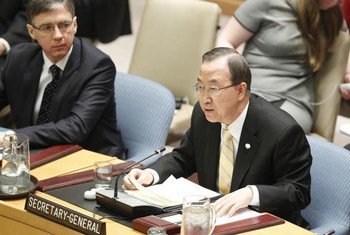 17 April 2013
Conflict-related sexual violence, horrific in itself, is also an impediment to national reconciliation and development, top United Nations officials told the Security Council at the start of a day-long debate, urging increased political and financial pressure on those who commit, command or condone sexual violence in war zones.