United Nations officials today highlighted the need to recognize the vital role of culture in poverty reduction and sustainable growth, and to ensure that it is integrated into the post-2015 development agenda.

As Member States plot the course for the global development agenda after 2015, the target date for achieving the anti-poverty objectives known as the Millennium Development Goals (MDGs), the General Assembly convened today’s high-level thematic debate to consider the role and impact of culture on development.

“The significance of the nexus between culture and development for the post-2015 agenda is not yet fully grasped,” said the President of the Assembly, Vuk Jeremic, who convened the debate in cooperation with the UN Educational, Scientific and Cultural Organization (UNESCO).

“Fully embracing the potential of this nexus will also help promote a greater sense of indivisibility and mutual belonging – a feeling that no community or nation can fulfil its potential until it is accompanied by the advancement of the entire mankind.”

He noted that it has not been possible to reach consensus on how to build on the agreed foundations of sustainable development in the discussions that have taken place in recent months. “The gap between means and ends has yet to be bridged – in my view, partly because the cultural component has largely been absent from our discussions.”

Secretary-General Ban Ki-moon stressed the need to recognize that there is no “one-size-fits-all” development model. “It is not enough to set global targets for all – we need to adapt to each context. Too many well-intended development programmes have failed, because they did not take cultural settings into account. This must be an overarching principle for all development efforts.”

Development has not always focused enough on people, he added. “To mobilize people, we need to understand and embrace their culture. This means encouraging dialogue, listening to individual voices, and ensuring that culture and human rights inform the new course for sustainable development. The fundamental role of culture was not fully acknowledged within the MDGs – as a goal, an overarching principle, or as an enabler.”

In her keynote address, UNESCO Director-General Irina Bokova told the meeting that no one would like to live in a world without music, art or dance, or with only one language.

“Culture is what we are. It is the wellspring of collective imagination, meaning and belonging. It is also a source of identity and cohesion at a time of change. It is a source of creativity and innovation,” she stated.

“No society in the world can flourish without culture. No development can be sustained without it. Cultural diversity is also a source to find creative solutions to problems. It enhances critical thinking to challenge old models,” she added. “We need to fully acknowledge this power of culture today as we shape a new global agenda to follow 2015.”

The Administrator of the UN Development Programme (UNDP), Helen Clark, highlighted the need to think more broadly about the role of culture in development. “As culture is vital to who we are, it is a vital aspect of human development. And to live lives they value, people must be free to choose their identity and to define who they are through their culture.

“With globalization, our world is shrinking as we become more interconnected than ever before,” she continued. “But commensurate with that, our respect for cultural diversity needs to grow. Indeed, respect for cultural diversity and sustainable development are mutually reinforcing and they provide the necessary basis for peace and harmony, which development needs to thrive anywhere.”

Culture, noted the UN High Representative for the Alliance of Civilizations, Nassir Abdulaziz Al-Nasser, affects all the dimensions of development.

“As such, a human-centred, culturally-sensitive approach to development will yield the most effective, sustainable, inclusive outcomes,” he said. “Specifically, a culturally-diverse approach will contribute to economic development, promote social cohesion and foster environmental sustainability.”

He added that, among other benefits, culturally-sensitive approaches provide solutions to complex development issues in an innovative way. “And yet, despite the benefits of cultural diversity, we continue to witness many conflict and extreme underdevelopment worldwide. This is because culture is either missing, misunderstood or worse, politicized.” 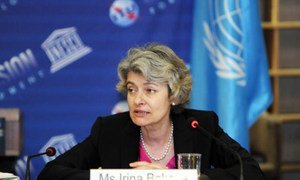 The United Nations Scientific, Educational and Cultural Organization (UNESCO) and China announced today an international congress on the role that culture plays in achieving sustainable development.