“Although the basis of the democratic reconstruction in Côte d’Ivoire is in place and the social and economic recovery is under way, the country is facing a profound political fragmentation,” the Independent Expert on the human rights situation in the country, Doudou Diène, told the Geneva-based Human Rights Council.

“The political dialogue remains the fundamental condition of the economic and social recovery of Côte d’Ivoire,” Mr. Diène said. “The ultimate challenge is to consider the national democratic framework as the only credible ground for the political debate, able to delegitimize the recourse to violence and to reinforce a culture of peace.”

The West African country was split by civil war in 2002. A 2010 presidential election, meant to be a culminating point in the peace process, resulted in months of violence when former President Laurent Gbagbo refused to step down after losing to Alassane Ouattara, who finally took office in May 2011.

Mr. Diène underlined that building an inclusive democracy supported by equitable justice remained one of the major challenges for a sustainable way out of the crisis.

In his report to the Council, Mr. Diène also noted the “urgent necessity for Côte d’Ivoire to work towards social peace and stability to foster a climate favourable to investment and the economic and social progress necessary to satisfy the basic needs of the population.”

On the subject of reconciliation, Mr. Diène suggested that the mandate of the National Dialogue, Truth and Reconciliation Commission be extended beyond its term in September 2013 to enable the body to finalize the activities scheduled in its terms of reference.

In addition, the Independent Expert reiterated his call for the arms embargo on Côte d’Ivoire to be lifted. In April, the Security Council extended its arms embargo on the grounds that the country is still vulnerable to instability fuelled by available weapons.

“Lifting the arms embargo on Côte d’Ivoire needs to be addressed urgently in order to reinforce internal security and face the risk of destabilization inherent to the crisis in the Sahelo-Saharian region,” he said.

Mr. Diène’s report was drafted following the international conference on impunity and equitable justice, held in February in the capital, Yamoussoukro, and his recent visit to the country in April during which he met with Government officials, political parties, civil society, diplomatic corps and development partners.

Independent experts are appointed by the Geneva-based UN Human Rights Council to examine and report back, in an unpaid capacity, on specific human rights themes. 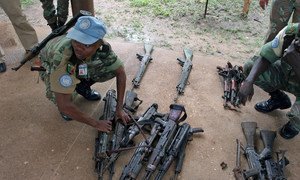 Maintaining that Cote d’Ivoire was still vulnerable to instability fuelled by available weapons, the United Nations Security Council today extended its arms embargo on the West African country as well as financial and travel sanctions on those who threaten the peace, until 30 April 2014.