IRIN
A Rohingya woman and her child at a makeshift camp outside Sittwe in Myanmar's western Rakhine State.
11 June 2013

“The human rights violations being committed against the Rohingya in Rakhine State are widespread and systematic and there continues to be absolutely no accountability for what is occurring there,” said the UN Special Rapporteur on the human rights situation in Myanmar, Tomás Ojea Quintana.

Calling for authorities to investigate all reported violations of human rights against the minority group, he added that there is no way of “glossing over this state of affairs” with the genuine progress that is being made in other areas.

The police reportedly fired indiscriminately on 4 June into a crowd of Rohingyas protesting peacefully against the proposed location of new shelters in Pa Rein village. Their homes had been destroyed last year during inter-communal violence. In addition to the three women killed, at least five other people were reportedly injured.

Mr. Ojea Quintana said Government authorities have “an obligation to conduct prompt, thorough and impartial investigations” into such accidents and hold those responsible to account.

Since the violence in Rakhine State erupted last June, “I have seen absolutely no evidence that the Government is fulfilling this obligation,” he added.

In his report to the Human Rights Council in March, the Special Rapporteur said he had received consistent and credible allegations of a wide range of human rights violations being committed against the Rohingya and wider Muslim population in Rakhine State. These include “sweeps” against Muslim villages, arbitrary detentions, sexual assault and torture.

Restating the offer he made in the report, Mr. Ojea Quintana said that if the Rakhine Investigation Commission fails to properly address such allegations of human rights violations, he will offer his support to the Government to pursue further investigations.

“I reiterate my offer of support to the Government to address the impunity which is enabling widespread and systematic human rights violations to continue against the most vulnerable of all ethnic minority groups in Myanmar,” he noted.

The President of the Human Rights Council, Remigiusz Henczel, is expected this week to make a statement on Myanmar. 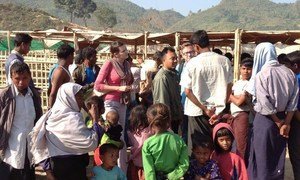 An independent United Nations human rights expert today urged the Government of Myanmar to respond unequivocally to the revival of a local order limiting the number of children Rohingya Muslims can have to two, stressing that this is a clear violation of their human rights.