MINUSTAH/Marco Dormino
Residents of a makeshift camp in Haiti.
10 June 2013

Following the razing of a temporary camp sight in Haiti, a senior United Nations official today expressed concern about ongoing illegal forced evictions and human rights abuses of families displaced by the 2010 earthquake.

“On June 5, the United Nations was informed that 120 to 150 families displaced by the 2010 earthquake and residing in Camp Bristou B1 were victims of illegal forced eviction on 4 and 5 June,” the office of the Humanitarian Coordinator for Haiti said in a news release.

A tractor was used to destroy tents starting on 4 June and continued throughout the night, leaving about fifty shelters after the demolition. Witnesses say the camp was located on private land, but the eviction was not orchestrated by the owner.

Acting Humanitarian Coordinator Sophie de Caen “has expressed concern over violations of the rights of internally displaced persons (IDPs) in Haiti and the non application of established formal camp closure procedures,” according to the news release.

According to her office, Ms. de Caen has brought the incident at Camp Bristou to the attention of Prime Minister Laurent Salvador Lamothe. She also vowed UN support for an initiative calling on senior Government officials to investigate the incident, spearheaded by Minister of Human Rights and the Fight against Extreme Poverty, Rose Anne Auguste.

She also renewed the humanitarian community’s call on the Government of Haiti to prioritize the search for sustainable solutions for people living in the camps.

Since 2013, about 4,000 people have been forced out of four camps counting this latest incident, the UN reported. If the trend continues, an estimated 75,000 people settled in 105 other camps constructed on private lands face threats of forced eviction.

The international community is providing support to Haitian authorities mandated to close IDP camps in a planned manner, by providing displaced persons with sustainable housing solutions. To date, a rental subsidy program has provided assistance to more than 37,000 families to help them relocate. In addition, more than 23,000 families will receive assistance to return this year. 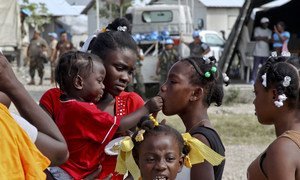 The top United Nations humanitarian official in Haiti has expressed grave concern about recent incidents of forced evictions of internally displaced persons (IDPs), following his visit to a site in the capital, Port-au-Prince, from which thousands of people were forced to leave.