UN Photo/Eskinder Debebe
The Pacific Island nation of Kiribati has been affected by climate change.

10 June 2013
In observance of World Oceans Day, a senior United Nations official called on the international community to act in a concerted and coordinated manner to halt and reverse the damage to the planet’s open waters caused by human activity.

In observance of World Oceans Day, a senior United Nations official called on the international community to act in a concerted and coordinated manner to halt and reverse the damage to the planet’s open waters caused by human activity.

“We are all currently very aware of the damage done to oceans and their ecosystems, these include depleted fishery resources, the impacts of climate change, loss of biodiversity, deterioration of the marine environment and other issues,” said Patricia O’Brien, Under-Secretary-General for Legal Affairs, as she opened a special Headquarters event to mark the Organization’s fifth annual observance of the Day.

She recalled that, given the important role played by oceans for the planet’s food security, and the health and survival of all life, as well energy needs, the General Assembly decided that, from 2009, 8 June would be designated by the UN as ‘World Oceans Day’ to raise global awareness of the current challenges faced by the international community in connection with the oceans.

Ms. O’Brien said that the theme of this year’s celebration, “Oceans and People,” indicates that oceans play a key role in human life, providing food, minerals, employment and recreation, as well as waterways for transport, energy sources and, potentially, much more. “However, human activity has frequently resulted in negative impacts.”

On the bright side, however, much of this damage may be reversible through coordinated and concerted action by the international community, including through implementation of existing legal instruments.

Such efforts, she said, should be assisted by intergovernmental process, such as the assessment of the first State of the World’s Oceans, which is expected to be released in 2015. Member States are also addressing new issues. For example, in recent months, special attention was being paid to matters such as the conservation of marine biodiversity in areas beyond national jurisdiction, including questions related to marine genetic resources.

“For these reasons, the observance of World Oceans Day by the UN is an opportunity to celebrate the oceans and to raise awareness of their crucial importance for all of our well-being,” she declared.

Ms. O’Brien announced that as part of the observance, the UN had partnered with the New York-based American Museum of Natural History for a panel presentation by, respectively, Dr. Alex de Voogt, Curator of African Ethnology, and Dr. Jennifer Newell, Curator of Pacific Ethnology.

At a press conference earlier in the day, the two Curators, from the Museum’s Anthropology Division, discussed the impact of climate change and degradation of the marine environment on the peoples and cultures of the Indian Ocean and the Pacific regions.

Ms. Newell said that researchers were witnessing the changing relationship of Pacific Islanders to their waters due to climate change. Many cultural transformations were under way because of the impact on communities of sea-level rise, water salinization, and even drought.

“Life is becoming quite untenable, especially in low-lying areas,” she said, adding that several island nations have already elaborated plans to move their entire populations elsewhere. It was predicted that tens of millions of people may have to leave their homes by 2050, “and where these people will go is of course a big concern.”

Meanwhile, in his message on the Day, which was released over the weekend, UN Secretary-General Ban Ki-moon said that oceans are integral to all humanity, and urged the international community to do more to reverse degradation of the marine environment.

“Let us work together to create new waves of action for ocean sustainability – for people and the planet,” Mr. Ban said.

“If we are to fully benefit from the oceans, we must reverse the degradation of the marine environment due to pollution, overexploitation and acidification,” he said, urging all nations to work towards that end, including by joining and implementing the UN Convention on the Law of the Sea, the broad based treaty governing the world’s waters, often referred to as “the Constitution of the oceans.”

Also over the weekend, New York City landmark the Empire State Building was lit in white, blue and purple representing the different layers of the ocean.

In other activities in honour of the Day, the UN Postal Administration (UNPA) issued on 31 May a set of 12 new stamps featuring iconic images from the classic Dr. Seuss book Once Fish, Two Fish, Red Fish, Blue Fish. The stamps incorporate fanciful characters in the story, like the “winking Yink” and the “boxing Gox,” who bring their own unique view of the healthy oceans.

“Designing these stamps using the colourful images from Dr. Seuss was not only a lot of fun but allows us to draw attention to the subject in a creative and unique way,” said UNPA Creative Director Rori Katz.

The Administration partnered with Dr. Seuss Enterprises on the project, and the stamps will be sold at the UN stamp shops at the world body’s headquarters in New York, Geneva and Vienna. The can also be purchased at unstamps.org. 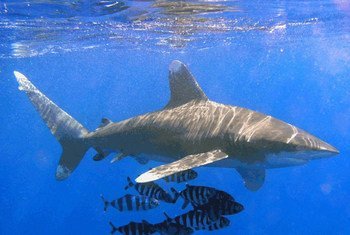 8 June 2013
Marking World Oceans Day, United Nations Secretary-General Ban Ki-moon urged the international community to do more to reverse degradation of the marine environment, which influences virtually all aspects of life on the planet.