MONUSCO/Sylvain Liechti
A displaced woman who fled fighting between FARDC and M23 rebels, at a camp in Kanyaruchinya, north of Goma, Democratic Republic of the Congo, (DRC).
10 June 2013

Senior United Nations officials today expressed concern about reports of dozens of children who escaped from the 23 March Movement (M23) in the Democratic Republic of the Congo being retaken by the rebel group and could face other serious security threats.

The UN peacekeeping mission in the DRC (MONUSCO) and the Special Representative of the Secretary-General for Children and Armed Conflict today cited in a news release reports indicating that at least 53 children are at risk of being re-recruited in Nyiragongo Territory, North Kivu Province, in eastern DRC.

The M23 rebel group is made up of former members of the Congolese armed forces, known by the French acronym FARDC, who mutinied in April 2012.

“I strongly condemn the recruitment and use of children as well as other grave child rights violations committed by the M23 and other armed groups,” said Roger Meece, the Special Representative of the Secretary-General in the DRC.

In the joint news release, the Special Representative of the Secretary-General for Children and Armed Conflict, Leila Zerrougui, urged the M23 and other armed groups to “immediately stop abusing children.”

“I want to remind their leaders that they will be personally held accountable for any violations against children, including the recruitment, re-recruitment or use of children in their ranks, Ms. Zerrougui added.

The children are apparently part of a group of at least 70 people recruited in Nyiragongo and Rutshuru territories.

“They escaped from the rebel group during clashes between Bosco Ntanganda and Sultani Makenga’s factions in February 2013. Since then, 17 have reportedly fled the area while the remaining 53 are still in hiding in several locations,” according to MONUSCO.

The UN Mission added that it continues to receive “worrying reports” that members of the M23 are meeting local chiefs and requesting them to identify and handover combatants who have deserted from the group.

In the statement, MONUSCO said that it is doing its utmost to access these children to ensure their protection and reunite them with their families.

Mr. Meece and Ms. Zerrougui reiterate their joint commitment to ensure the full protection of children affected by the armed conflict in the east of the country in collaboration with the Government, the UN and non-governmental organization partners. 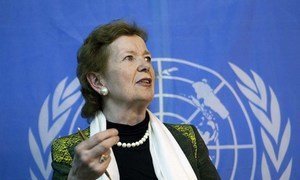 Welcoming the possible resumption of peace talks between the Government of the Democratic Republic of the Congo (DRC) and the 23 March Movement (M23), the United Nations Special Envoy for Africa's Great Lake's region has urged both sides to engage in earnest discussion to resolve all outstanding issues.