Achim Steiner, UN Under-Secretary-General and Executive Director of the UN Environment Programme (UNEP) welcomed the announcement by the United States and Chinese Heads of State that they would be targeting Hydrofluorocarbons (HFCs) –a group of replacement chemicals for products such as refrigerators and foams for which there are already a range of climate and ozone-friendly alternatives.

“The signal from [President Barack Obama and Chinese President Xi Jinping] is important as both a confidence builder and if it paves the way to a universal agreement involving all nations that reflects the science of where all emissions are today and where they need to be by a series of deadlines beginning with 2020,” said Mr. Steiner said in a press release from UNEP.

The announcement, Mr. Steiner continued “could signal a new and perhaps transformational chapter in international cooperation on climate change.”

HFCs are beginning to replace another group of chemicals known as HCFCs that damage the ozone layer—the thin gassy layer around the Earth that filters out deadly levels of ultra-violet light from the sun.

UNEP says that while HFCs are ozone-layer friendly they are, however, powerful greenhouse gases: if taken up by industry over the next few years and decades they are likely, by 2050, to amount to emissions equivalent to 3.5 to 8.8 Gigatonnes (Gt) of carbon dioxide.

That is comparable to total current annual emissions from transport, estimated at around 6-7 Gt annually according to a UNEP-coordinated study from 2011.

The US and Chinese leaders said they would work through the Montreal Protocol, the UNEP-hosted treaty established to protect the ozone layer, and the United Nations Framework Convention on Climate Change (UNFCCC) to achieve international action in respect to phasing down the consumption and production of HFCs.

Mr. Steiner said: “Along with a variety of recent signals from several key countries including China and the United States, this one on HFCs by these two key economies is welcome as the world moves towards a universal UN treaty on climate change by 2015—certainly allowing the market for HFCs to grow will only aggravate the challenge of combating climate change.”

UNEP, in partnership with over 60 countries and organizations, is also working to phase-down some HFCs and other so- called short-lived climate pollutants such as black carbon or 'soot' and methane under a one-year-old initiative called the Climate and Clean Air Coalition (CCAC).

This voluntary Coalition is promoting reduction of short-lived climate pollutants to tackle air pollution, bring widespread benefits for health and agriculture as well as to lead to near-term climate benefits.

“It is widely recognized that securing a meaningful treaty and keeping an average global temperature rise under 2 degrees C this century will require all hands on deck—what, however, must not be overlooked or sidelined is the urgency to also tackle the principal greenhouse gas, carbon dioxide, as part of negotiations underway under the UN Climate Convention,” said Mr. Steiner. 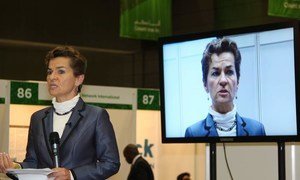 In the face of “clear and present danger,” the United Nations climate change body is warning that a stepped-up coordinated response is needed to fend off the impacts of climate change after the world’s carbon-dioxide concentrations surpassed their highest level in 4 million years.