OCHA
A child gets measured for malnutrition in Mali.
8 June 2013

United Nations officials have welcomed the funds pledged and political agreements reached at the Nutrition for Growth summit, held today in London, as a new opportunity to ensure millions more infants and pregnant women have better diets, and to reduce cases of stunting and deaths from malnutrition.

In a video message to the high-level event, UN Secretary-General Ban Ki-moon reaffirmed the Organization's commitment to alleviating malnutrition in all its forms.

“No child should suffer the injustice of malnutrition. Yet one in four will be stunted by chronic malnutrition -- unless we act,” said the UN chief.

“These commitments can support children's development, help hundreds of millions of people and boost the economies of some of the world's most vulnerable countries. The UN system and I will do everything within our power to see them fulfilled,” he declared.

The event, which brought together leaders from Governments, the private sector and civil society, was hosted by the Governments of Brazil and the United Kingdom, and the Children's Investment Fund Foundation (CIFF).

According to the UN Children's Fund (UNICEF), the event resulted in renewed commitments to accelerate progress towards significant reductions in stunting and improved nutrition for children and mothers around the world, including initial pledges of funds exceeding $4 billion.

“For children who face the unnecessary threat of stunting – something that not only deprives them of physical good health but dramatically weakens their potential to learn, to earn a decent income and to contribute to the prosperity and growth of their communities – today's gathering underlined a global determination to meet that threat,” said UNICEF Executive Director Anthony Lake in a press release.

At the event, UNICEF pledged to continue its own investment in strengthening nutrition in countries worst-affected by stunting and other forms of undernutrition – an investment represented by more than 350 nutrition experts working with governments and local communities in some 65 countries, backed by a financial contribution that has seen around $1 billion spent by UNICEF on improving nutrition over the last five years.

UNICEF was among several United Nations agencies welcoming the formal Global Nutrition for Growth Compact agreed by participants that highlighted commitments to make nutrition a top political and socio-economic priority for both donors and countries affected by undernutrition, capitalize on scientific knowledge and innovation to improve nutrition, and strengthen transparency and monitoring of results.

José Graziano da Silva, Director-General of the UN Food and Agriculture Organization (FAO) also welcomed the new funding pledges, commitments and targets for action on nutrition. “I welcome the Global Nutrition for Growth Compact agreed at the meeting. FAO will work with all committed Governments to realize their food security and nutrition goals,” Mr. Graziano da Silva said.

He also outlined how FAO was stepping up its efforts to improve nutrition over the last 18 months. This includes the additional deployment of experts in the field to better respond to country needs and the implementation of a new nutrition strategy.

Mr. Graziano da Silva also stressed the importance of improving measurement of hunger and malnutrition. In this regard, FAO is developing the Voices of the Hungry project- a new, faster and more precise way of measuring hunger and food insecurity across the world.

The Scaling Up Nutrition (SUN) Movement today hailed world leaders signing the Compact. Since launching in 2010, the SUN Movement has expanded to 40 countries that together are home to 80 million stunted children equivalent to about half of all stunted children in the world.

“Good nutrition is essential for the growth of individuals, nations and economies,” said Dr. David Nabarro, Coordinator of the SUN Movement. “All in the Movement are excited by this event in London, which should be remembered as the day when the world started to turn a corner and start to see an end to the scandal of child malnutrition in today's world,” he said in a press release on the event.

UN food, agriculture chief urges ‘nothing less than the eradication of hunger and malnutrition’ 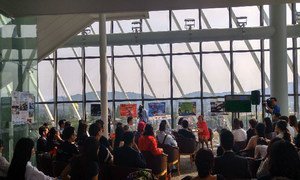 The third Sustainable Development Goal – to ensure inclusive and equitable quality education and promote lifelong learning opportunities for all – was front and centre at a United Nations conference in Gyeongju, Republic of Korea, providing face-to-face opportunities for tackling a range of issues, including the education gap.