UN Photo/Stuart Price
Somalis stand in front of a kiosk in market area of the port city of Kismayo, south Somalia.
8 June 2013

The head of the new United Nations Assistance Mission in Somalia (UNSOM) called today for an immediate end to fighting in the southern port city of Kismaayo, where clashes have reportedly led to civilian deaths.

The head of the new United Nations Assistance Mission in Somalia (UNSOM) called today for an immediate end to fighting in the southern port city of Kismaayo, where clashes have reportedly led to civilian deaths.

"I urge all parties to commit to resolve differences peacefully. I deplore reports of the loss of civilian life,” the Secretary-General's Special Representative for Somalia, Nicholas Kay, declared today in a press statement.

According to unconfirmed reports, clashes that flared in Kismaayo yesterday reignited today. Through his statement, Mr. Kay called for the fighting to cease immediately. “This new chapter in Somalia's history must be one in which issues are resolved peacefully.”

More violence will only prolong the suffering of Somalis and delay the revival they and the international community are working for, the statement added.

Mr. Kay, who took up his post just five days ago, noted that the UNSOM, as the UN Security Council recently reiterated, will play a constructive role in resolving political difficulties of any kind in close consultation with all parties in Somalia and the region. “I am engaging immediately on this issue.”

The statement says that the Mission chief discussed his concerns with Somali President, Hassan Sheikh Mohamud today, during their first official meeting in Mogadishu, where UNSOM is headquartered.

They both called for the convening of a reconciliation conference as soon as possible, as IGAD Intergovernmental Authority on Development (IGAD) Heads of State have proposed. 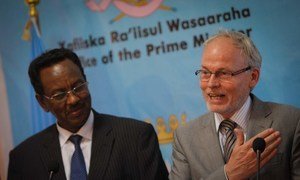 The head of the new United Nations Assistance Mission in Somalia (UNSOM) today pledged to support the Government and the people of the country in their quest for security and prosperity, as he arrived in the country’s capital for the Mission’s start of operations.