8 June 2013
Welcoming the possible resumption of peace talks between the Government of the Democratic Republic of the Congo (DRC) and the 23 March Movement (M23), the United Nations Special Envoy for Africa's Great Lake's region has urged both sides to engage in earnest discussion to resolve all outstanding issues.

Mary Robinson, in a statement issued by her Office last evening, welcomed that the talks “are about to resume soon” in Kampala, the Ugandan capital after which they are named, under the auspices of the Chairperson of the International Conference for the Great Lakes Region (ICGLR), Ugandan President Yoweri Museveni.

"She urges both sides to engage in earnest in their discussions in order to resolve all outstanding issues in the negotiations and to move toward the normalization of the situation in the eastern DRC," the statement said.

“The Special Envoy underscored the importance of political efforts to achieve peace and security for the people the eastern Democratic Republic of the Congo and the region,” it added.

Last November the M23 – made up of former members of the FARDC who mutinied in April 2012 – occupied Goma in eastern DRC. Clashes between the Government and rebels displaced more than 130,000 people in and around the city and sent another 47,000 fleeing to neighbouring South Kivu province. Amidst widespread condemnation and calls for their withdrawal, the M23 fighters pulled out after 11 days.

In the wake of those events, the Security Council in March authorized the deployment of an intervention brigade within MONUSCO to carry out targeted offensive operations, with or without the Congolese national army, against armed groups that threaten peace in eastern DRC. A contingent of Tanzanian soldiers arrived Goma last month as part of the brigade.

A little more than two weeks ago, fighting again broke out in Goma between the FARDC and M23, but the hostilities ebbed somewhat ahead of an unprecedented visit to the region by UN Secretary-General Ban Ki-moon, World Bank President Jim Yong Kim, along with Mrs. Robinson.

The three visited the DRC, Rwanda, Uganda and other concerned countries to bolster support for the Peace, Security and Cooperation Framework for the Democratic Republic of the Congo and the Region, or as Mrs. Robinson describes it, a “framework for hope.”

The UN-brokered accord, signed in February by 11 African leaders, aims to end the cycles of conflict and violence in eastern DRC and to build peace in the wider region. Mrs. Robinson also travelled to the region in late April and early May to push for implementation of the framework.

On 21 May, she proposed a set of principles for peace, which seek to guide immediate efforts to tackle the crisis in the region, while maintaining a focus on long-term solutions. They recognize the importance of ending the suffering of the mostly women and children who have been displaced by the violence, and call for the acceleration of the voluntary return of all refugees in the region.

They also call for the demobilization of all armed groups active in eastern DRC, and urge all parties to comply with all their obligations under international law. 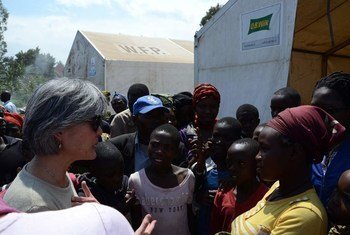 4 June 2013
The Democratic Republic of the Congo (DRC) is placing a great deal of hope on the latest peace agreement, a senior United Nations official today said, following her visit to the region to keep a global spotlight on the complex and protracted humanitarian emergency in the African country.