UNOCHA/Raja Nisar Ahmed
OCHA Operations Director John Ging (right) visits a grievance desk in the Jalozai camp for displaced families on his visit to Pakistan from 28 to 31 May 2013.

5 June 2013
Additional funding is needed for Afghanistan and Pakistan if the United Nations humanitarian community and its partners are to deliver lifesaving services and assist the South Asian countries in developing their potentials, a senior United Nations relief official said following a visit to the region.

“It’s about laying the platform for all of the other elements of transition. If you don’t get the humanitarian right, then you don’t have anything else to build upon,” John Ging, Director of Operations, UN Office for the Coordination of Humanitarian Affairs (OCHA), told journalists in New York.

The humanitarian situation in Afghanistan is “very challenging and very dangerous,” Mr. Ging said. He had arrived in Kabul, along with seven senior emergency officials, on 24 May, the day a compound of the UN-partnering International Organization for Migration (IOM) was attacked.

International conferences in Tokyo on Afghanistan’s civilian needs and a separate meeting in Chicago focused on security matters respectively raised $16 billion and $4.1 billion, but humanitarian aid was not mentioned at either event, Mr. Ging noted.

He reiterated his appeal to donors to redouble their focus and generosity to meet the $471 million humanitarian appeal for Afghanistan. It is currently 38 per cent funded at $179 million.

The priorities for humanitarian response in 2013 are to provide more assistance to the internally displaced, who currently number 535,000 Afghans. It is also to minimize the human impact of natural disasters, particularly draught and flooding, which reoccur annually affecting a quarter of a million Afghans.

The funding would also help secure better access to people in need, including for distribution of aid. Some 9 million Afghans are hungry, of that figure, 2.1 million people face severe food insecurity, Mr. Ging said.

Geographically, the five provinces with the highest needs are those with the greatest insecurity: Hilmand, Nangarhar, Ghazni, Kunar and Kandahar, which Mr. Ging visited with his delegation.

“In Kandahar, we saw clearly another manifestation of an anticipated economic shock,” the UN official said. A half-million young Afghans are coming into the labour force in the coming months, Mr. Ging said. Afghanistan faces a demographic bulge with over 60 per cent of its population 25 years old or younger.

Afghanistan is also one of the least developed grounds ranking 175 out of 187 on the Human Development Index. Its literacy rates hover at 26 per cent, dipping to 12 per cent for women, according to figures cited in the press conference.

The situation in Pakistan is also “very complex” Mr. Ging said, particularly because of a drop off in funding in recent years. The humanitarian appeal in 2010 was 70 per cent filled, but only 44 per cent filled in 2011 and 29 per cent last year.

“This is again evidence of failing of the international commitment to do what we are there to do,” Mr. Ging said. “As a humanitarian organization, it is frustrating to work with productive partnerships and not be able to deliver.”

The situation is especially alarming given the upcoming monsoon season which usually results in flooding. Unlike in previous years, the humanitarian community in Pakistan does not currently have the prepositioned stocks in the region to respond productively.

“We know perfectly well donors have demands, locally, but given the scale of the vulnerability and the need, we need the stocks to save the lives if the floods come again this year as they have in previous years,” Mr. Ging urged. 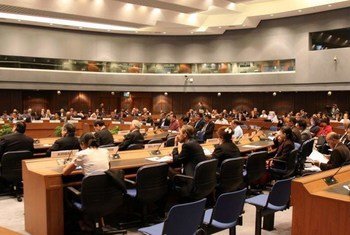