Lasting solutions in Africa must address the links between peace, security and development, Secretary-General Ban Ki-moon said today, urging participants at an international conference to work through global dialogue to address the socio-economic and environmental dimensions of sustainability on the continent.

In his keynote address to the fifth Tokyo International Conference on African Development (TICAD V), Mr. Ban described the gathering as “a call to action.” Convened every five years since 1993, TICAD aims to promote high-level policy dialogue between African leaders and their partners and to mobilize support for African-owned development initiatives.

“Africa is on the rise,” Mr. Ban said. “The goals of TICAD are the UN's goals. We are committed to helping Africa realize the MDGs [Millennium Development Goals]. We will make sure Africa's priorities are fully reflected in our post-215 development agenda.”

By 2015, seven of the world's top ten fastest-growing economies will be in Africa, the IMF reported.

Included on the list is the Democratic Republic of the Congo. Mr. Ban, his envoy to the Great Lakes, Mary Robinson, and the President of the World Bank, Jim Yong Kim, just returned from a first of its type visit there to show support for a new peace framework in the region and to emphasize that development is the foundation for peace.

“We traveled together to emphasize that development is the foundation for peace,” Mr. Ban said.

He noted that many African countries have made “great progress” on the MDGs and are directly involved in discussions about the post-2015 sustainable development agenda.

“Many African Governments understand the value of investing in people,” Mr. Ban stressed, but noted that millions of Africans lack jobs, health care and food, and suffer under conflicts.

At TICAD, Mr. Ban urged participants to “advance progress on education, health and women's empowerment and unleash the power of Africa's vibrant youth.”

The current global cohort of young people are part of a group of 1.2 billion – the largest ever population of youth in history. To harness their energy and creativity for the benefit of all, the United Nations has launched a series of actions, including the appointment by the Secretary-General of a Youth Envoy, Ahmad Alhendawi, and the elaboration of the System-Wide Action Plan on youth (SWAP).

On environment, Mr. Ban noted that millions of Africans are affected by climate change, although they “did not do much to cause the problem,” they will need more help coping with its effects.

“That is why I am working for a global, legally binding, universal climate agreement by 2015,” Mr. Ban said. “To build momentum, I am inviting leaders from around the world to a high-level meeting on climate change in New York next year.”

He added that climate change can be an opportunity by realizing Africa's enormous potential for clean energy, leapfrogging existing fossil-fuel energy sources and, in the process, cut greenhouse gas emissions and improve public health.

Less than 1 per cent of all patent applications relating to clean energy technology (CET) have been filed in Africa, according to a study released last month by the UN Environment Programme (UNEP) and the European Patent Office (EPO).

The study also found that hydropower, the most commonly used renewable energy source, is estimated to be utilized at just 4.3 per cent of the continent's total capacity – although recent years have seen efforts to ramp up clean energy, with North African nations leading in solar and wind categories, Kenya in geothermal, Ethiopia in hydro and Mauritius in bioenergy.

To spur action among governments, the private sector, and civil society partners, Mr. Ban had launched his Sustainable Energy for All initiative to mobilize commitments on sustainable energy and reach universal access to modern energy services by 2030.

Today's conference comes one week after the 21st African Union Summit in Addis Ababa, Ethiopia, which coincided with the 50th anniversary of the AU's establishment, originally as the Organization of African Unity (OAU), in 1963.

Speaking at the African Union headquarters, Mr. Ban declared that while Africans forge ahead with “a new narrative” for their continent's future, the United Nations would support them along the way.

In his address today, Mr. Ban paid tribute to his hosts. He thanked Japan for the more than a billion and a half dollars donated for development activities.

The UN chief also noted in 2011, when the triple disaster hit Fukushima, “the Japanese people stood firm for Africa.”

On the margins of the conference, Mr. Ban met with Fumio Kishida, Foreign Minister of Japan. He expressed his appreciation to Japan for hosting the Conference, as well as for Japan's contributions to promoting the MDG's in Africa. He also noted the country's leading role in human security, peacekeeping and peacebuilding. The Secretary-General underscored how Japan's strong leadership and commitment was necessary for the success of the work of the United Nations.

Mr. Ban also met with Alassane Ouattara, President of Côte d'Ivoire and Chairman of the Economic Community of West African States (ECOWAS). They exchanged views on recent developments in Côte d'Ivoire, Mali where ECOWAS and the AU are involved in assisting the UN with the transfer from AFISMA to the new peacekeeping mission MINUSMA, Guinea, and more generally on West Africa.

The UN chief welcomed the significant progress Côte d'Ivoire has made in a number of areas and noted that challenges remain, including on the disarmament, demobilization and reintegration of former combatants.

In addition, Mr. Ban met with Hailemariam Dessalegn, Prime Minister of Ethiopia. They discussed a range of issues of mutual interest to the African Union and the United Nations, including the political situations in Somalia; Sudan and South Sudan; the Democratic Republic of the Congo; and Mali and the Sahel.

Mr. Ban also met with Dioncounda Traoré, Interim President of Mali to discuss recent developments in the country and the deployment of MINUSMA. Mr. Ban noted significant gains on the military front and stressed the need for similar progress on the political side. He welcomed the announcement by the President to hold presidential elections on 28 July 2013 and national legislative polls in September and stressed the need to ensure that they are transparent, credible, all-inclusive and peaceful.

Also on the sidelines of the TICAD V, Mr. Ban discussed developments regarding the constitution-making process in Tunisia with President Moncef Marzouki. Mr. Ban expressed his encouragement for the national dialogue process in the country and emphasised the need for the constitution to guarantee the inviolability of human rights. Discussions also included the situation in Mali and the Sahel, Libya and Syria, as well as development and education.

In a meeting with Egyptian Prime Minister Hesham Qandil, Mr. Ban reaffirmed the UN's commitment to work alongside the Government and the people of Egypt in support of the country's democratic transition, development and prosperity. Mr. Ban welcomed Egypt's positive role on regional issues and they exchanged views on regional matters, including Syria and the Middle East, as well as Sudan and South Sudan and Myanmar.

Mr. Ban met today with Idris Déby Itno of Chad to congratulate the President on the signing of an agreement on investigations in Chad related to the trial of ex-President Hissène Habré. The two leaders discussed internal developments in Chad as well as the situation in the broader region, including in the Central African Republic (CAR), Mali and the Sahel, Libya and Sudan and South Sudan.

They also exchanged views on the threat posed by Boko Haram, as well as on regional efforts related to fight piracy in the Gulf of Guinea.

Later in the day, Mr. Ban met with Nkosazana Dlamini-Zuma, Chairperson of the African Union Commission. They exchanged views on recent developments in a number of countries including Somalia, Madagascar, Mali, Sudan and South Sudan, the Great Lakes region, and the Central African Republic.

Mr. Ban also met with President Boni Yayi of Benin. They discussed Benin's social and economic reforms, as well as good governance programmes. Mr. Ban expressed his hope that the forthcoming local elections will be peaceful and transparent.

The two leaders also discussed the need to combat drug trafficking and organized crime, as well as the MDGs and the situation in Mali and the Sahel. 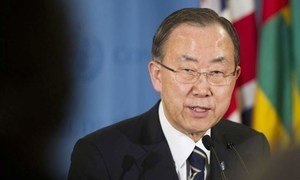 Secretary-General Ban Ki-moon today called on Governments and private investors alike to be courageous and help Africa’s Great Lakes region leave behind its strife-torn past and a craft a “new narrative” based on peace, security and long-term development.