MINUSTAH
MINUSTAH peacekeepers on patrol.
31 May 2013

Secretary-General Ban Ki-moon has appointed career diplomat Sandra Honoré of Trinidad and Tobago as the new head of the United Nations peacekeeping mission in Haiti, it was announced today.

Secretary-General Ban Ki-moon has appointed career diplomat Sandra Honoré of Trinidad and Tobago as the new head of the United Nations peacekeeping mission in Haiti, it was announced today.

Ms. Honoré, who will take up her functions in mid-July, succeeds Mariano Fernández Amunátegui of Chile as the Secretary-General’s Special Representative and head of the UN Stabilization Mission in Haiti (MINUSTAH).

Mr. Ban thanked Mr. Fernández Amunátegui, who completed his assignment on 31 January 2013, for “his determination and leadership of MINUSTAH during a critical period for Haiti with the transition to a new Government and a challenging security situation,” according to the announcement of the appointment.

He also expressed his gratitude to Deputy Special Representative Nigel Fisher for providing excellent leadership in the interim for the Mission, which was set up in June 2004.

Ms. Honoré brings with her extensive experience working in multilateral settings, including as Chief of Staff, Office of the Assistant Secretary-General of the Organization of American States (OAS) from 2000 to 2005. She had an assignment as Special Assistant to the Chief of the OAS Electoral Observation Mission to Haiti from 1995 to 1996.

She has been a diplomat since 1979, serving her government in many capacities in, among others, Costa Rica, Brazil and the United States.

Also today, it was announced that Mr. Ban has appointed Thomas Gass of Switzerland as Assistant Secretary-General for Policy Coordination and Inter-Agency Affairs in the Department of Economic and Social Affairs. He will replace Thomas Stelzer.

Since August 2009, Mr. Gass has served as Head of Mission of Switzerland to Nepal. He brings with him wide-ranging experience in bilateral and multilateral development cooperation. 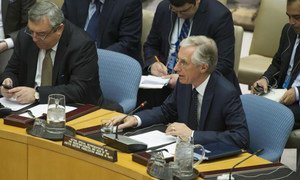