30 May 2013
Surges in jellyfish populations due to overfishing may be one of the reasons behind the drop in fish stocks observed in the Mediterranean and Black Sea, according to a new United Nations report which argues for including jellyfish in fisheries management.

Surges in jellyfish populations due to overfishing may be one of the reasons behind the drop in fish stocks observed in the Mediterranean and Black Sea, according to a new United Nations report which argues for including jellyfish in fisheries management.

Overfishing removes top predators from the sea helping to create conditions where jellyfish “blooms”, or suddenly increased numbers, according to the report published by the UN Food and Agriculture Organisation’s (FAO) General Fisheries Commission for the Mediterranean.

The Review of Jellyfish Blooms in the Mediterranean and Black Sea advocates incorporating jellyfish research into fisheries management, “Normally, only the impact of human fishing activities is taken into account in setting sustainable fishing limits, but jellyfish can also have a high impact.”

According to the report, an increased number of jellyfish in the waters creates a “vicious cycle” where the jellyfish increasingly prey on fish eggs and larvae, and compete for the same food source as the fish stock already depleted by overfishing.

If the trend continues, jellyfish could supplant fish in the world’s oceans, according to some experts cited in the FAO report who speak of “a global regime shift from a fish to a jellyfish ocean.”

In addition to overfishing, the report’s authors note the impact of global warming which enhances the species that thrive at tropical latitudes to span out, and the prevalent use of sea walls – built to prevent coastal erosion – which are ideal habitats for some jellyfish.

The impact of jellyfish was demonstrated in the early 1980s when Mnemiopsis leidyi, a jellyfish species known as the “Sea Walnut” and normally resident on the Atlantic, was accidentally introduced into the Black Sea and had such “overwhelming" impact on fish populations that fisheries were put “on their knees.”

According to media reports, by 1989, the population reached its highest level with some 400 specimens per m³ of water or more than 10 animals per cubic foot of water. The jellyfish ate up a commercially important type of anchovy, preying on the larvea and young, as well as the anchovy’s food source.

The problem was resolved after another invader species, the Beroe ovate, which feeds on Mnemiopsis, also arrived in the Black sea, which rebalanced the predator-prey dynamic.

In another example, the Pelagia noctiluca jellyfish, known commonly as “the mauve stinger” coupled with overpopulation, contributed to fish populations dropping in the Adriatic about 30 years ago.

More recently, according to a media report in November 2007, a 10-square-mile (26 km2) swarm of the jellyfish wiped out a 100,000 fish salmon farm in Northern Ireland causing some $1.5 million worth of damage

Among other measures to prevent or cope with jellyfish blooms, the report urges using jellyfish products for food and medicine.

China is among the first countries to process jellyfish for human consumption, particularly the edible Rhopilema esculentum, and represents a multi-million-dollar sea food business in Asia.

Other jellyfish, such as the “immortal jellyfish” or Turritopsis nutricula, capable of reversing its ageing process, holds out the promise of developing powerful rejuvenation products for humans. 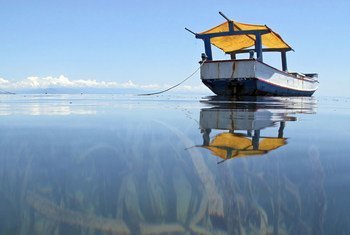 12 April 2013
The fight against hunger and climate change will hinge on the success of sustainable development of oceans and fisheries, a top United Nations official stressed today, adding that there can be “no truly ‘green economy’ without a ‘blue economy.’”