Secretary-General Ban Ki-moon today called on Governments and private investors alike to be courageous and help Africa’s Great Lakes region leave behind its strife-torn past and a craft a “new narrative” based on peace, security and long-term development.

The United Nations chief made that call as he spoke to reporters after briefing the Security Council on his week-long visit to the Democratic Republic of the Congo (DRC), Rwanda and Uganda with World Bank President Jim Yong Kim, and Special Envoy for the Great Lakes Mary Robinson.

The visit to the region, which also included stops in Mozambique and Addis Ababa, Ethiopia, was to support the Peace, Security and Cooperation Framework for the Democratic Republic of the Congo and the Region.

The UN-brokered accord, signed in February by 11 African leaders, aims to end the cycles of conflict and crisis in the eastern DRC – where, in the most recent hostilities centred around the area of Goma, rebels from the 23 March Movement (M23) have clashed repeatedly with the DRC national armed forces (FARDC) – and to build peace in the wider region.

Mrs. Robinson has dubbed the accord “a framework of hope,” and the Secretary-General echoed that sentiment today, underscoring that the agreement gives the people of eastern DRC their best chance in many years for peace, human rights and economic development. “It is also a foundation for stability and progress for the entire Great Lakes region,” he added.

Mr. Ban told reporters that he and Dr. Kim had visited the Heal Africa hospital in Goma to meet women and girls who had been brutally raped by armed groups, including Congolese armed forces. “They, and the people lining the city streets, had a clear message: no more war, no more abuse, no more impunity,” he said, recalling the hand-written signs the villagers had waved as he and the World Bank chief had made their rounds.

Yet, he said, a peace deal must deliver a peace dividend – health, education, jobs, opportunity. “That is why Dr. Kim announced a new $1 billion dollar World Bank initiative to support social safety nets, cross-border trade, energy and essential infrastructure,” Mr. Ban said, noting that these investments will boost the work both organizations are doing to support sustainable economic growth in the Great Lakes region.

“The region has enormous potential for those with the vision and courage to invest – Governments and private investors alike,” he said, noting that in the energy sphere alone, geothermal, methane and hydro resources meant the DRC and the wider Great Lakes could be a “powerhouse.”

Mr. Ban said there is no reason why the DRC cannot follow the development path of countries such as Mozambique, which had emerged from a bitter civil war to achieve peace and economic growth.

“Across Africa we see the same story: where there is sustained peace and good governance, economic growth and prosperity follow. These changes do not happen overnight – but they are happening,” he declared.

Pledging his determination to do everything in his power to encourage and nurture “this new African narrative, all the while knowing that progress can be fragile and that serious challenges remain,” he told reporters that he planned to hold further talks on these matters this weekend at the Tokyo International Conference on African Development (TICAD).

He also reminded reporters that his high-level panel on the post-2015 development agenda will release its report tomorrow. “Even as you cover today’s immediate crises, I hope you will also pay attention to this effort, which aims to put in place the solid foundations for a peaceful tomorrow,” he said. 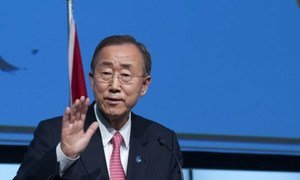 Secretary-General Ban Ki-moon today stressed that African countries have a “historic opportunity” to end the conflict in the Democratic Republic of the Congo (DRC), and underlined that joint efforts will be critical to stabilize the region.