UN Photo/Evan Schneider
Mother of an Argentinean "desparecido" or "disappeared" tells her story during a visit to Buenos Aires in June 2011 by Secretary-General Ban Ki-moon.
29 May 2013

Secretary-General Ban Ki-moon has urged Member States to join an international treaty aimed at eliminating enforced disappearances and stop impunity for this scourge.

“We must clarify the cases of disappeared persons, provide reparations to victims and bring perpetrators to justice,” Mr. Ban said last night at the opening of a new photo exhibit at United Nations Headquarters in New York entitled “Absences.”

The exhibit pays tribute to dozens of people who disappeared as a result of States suppressing legitimate demands concerning issues such as democracy, freedom of expression or freedom of religion. The victims include the “desaparecidos” of the military government that ruled Argentina in the late 1970’s and early 1980’s.

Among those attending the launch were the mothers and grandmothers of some of the desaparecidos featured in the exhibit. Mr. Ban urged Member States to answer the call of these relatives and ratify the UN Convention for the Protection of All Persons from Enforced Disappearance and “act on its provisions.”

The Convention, which was adopted by the UN General Assembly in 2006 and entered into force four years later, has the support of 38 countries.

Enforced disappearance is considered to be the arrest, detention, abduction or any other form of deprivation of liberty by agents of the State or by persons or groups of persons acting with the authorization, support or acquiescence of the State.

Adding a personal note to the launch, Mr. Ban recalled his visit two years ago to the Space for Memory and for the Promotion and Defence of Human Rights in Buenos Aires, Argentina.

“I was deeply moved to see the chambers where thousands of people were arrested, tortured and disappeared,” he told the audience. “I said that all societies experiencing such tragedies must embrace truth and restore historical memory.”

Turning to the exhibit, he said that the photographs “bring us closer to the past so that we can draw lessons for the present and prevent these crimes in the future.”

Mr. Ban thanked those who made the exhibit possible and used the launch as an opportunity to renew his commitment to answer the call of the mothers and grandmothers of Argentina and others to protect human rights. 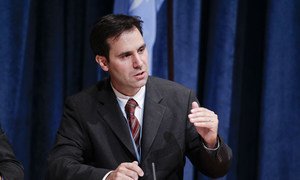 A group of independent United Nations experts today called for clear and firm political will to prevent enforced disappearances, which continue to persist around the world 20 years after the adoption of a declaration aimed at eliminating this heinous practice.